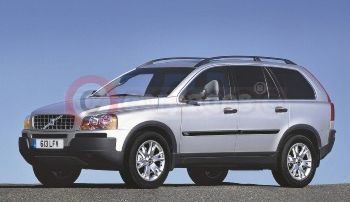 In its first full year, the Volvo XC90 beat all forecasts and became the second best selling large SUV in November and December 2003, and sixth overall for the year with a total of just under 4,000 sold in the UK, and a staggering total of nearly 62,0001 globally.

With the XC90 expected to prove even more popular in 2004, Volvo is striving to reduce waiting times to more acceptable levels by increasing XC90 production to a rate of 90,000 units per annum by summer 2004 – an 80 per cent increase over the initial 50,000 units planned when the XC90 was launched less than two years ago. As a result, registrations of XC90s in the UK are predicted to increase to 6,500 this year.

The XC90 looks set to continue its winning streak in 2004 with its first ‘Best 4x4’ award already announced at the What Car? Car of the Year Awards 2004 in London on 22 January.

Winning the award for the second year running, What Car? praised the XC90 for its quality, style, safety and design:

"The Volvo allows people who might never have had a 4x4 to move seamlessly across from an expensive saloon. The furnishings are plush; their style and quality is such that they would not look out of place in an S80 saloon – or a German car; and the equipment you get is in keeping.

"And, being a Volvo, you know it will be safe, and not just in the number of airbags ready to trigger. Sensors detect overly aggressive driving that might cause a roll-over and slow the car down; special crash structures in the front prevent smaller cars from being squashed."

With a great design and the flexibility of seven individual forward facing seats, What Car? concluded that the XC90 still topped its class: "Despite the arrival of Porsche and Volkswagen in this class in the past year, and a revised X5, it remains the most complete 4x4."

Any fears that the XC90 would deter customers from its other AWD stablemate in the ‘XC’ range, the XC70, have been proved wrong by a 37.6 per cent increase in sales with a total of 1164 XC70s registered in 2004 - beating the Audi Allroad for the first time.

The XC70 offers the practicality of the V70 AWD, but with extra ground clearance and a distinctive appearance with sturdy, larger bumpers and side mouldings for more rugged, ‘cool’ looks and greater protection against the elements.

This is a 17-year+ news article, from our Volvo archive, which dates back to the year 2000.

If in doubt check with your local Volvo dealer as car prices and technical data will have changed since 2004.