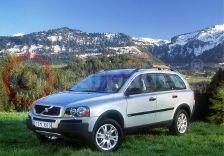 The 163bhp, 2.4-litre XC90 D5 turbodiesel with Geartronic transmission is less thirsty than its rivals, returning 31.0mpg on the combined cycle, compared to 29.1mpg and 29.7mpg for the equivalent BMW X5 3.0D and Mercedes ML270 CDi models with automatic transmission, respectively.

Figures for the XC90 D5 with manual transmission are expected to be even more competitive, and will be available when the six-speed gearbox is introduced mid 2003.

The 272bhp, 2.9-litre petrol XC90 T6 with the standard Geartronic transmission sits alongside the 228bhp BMW X5 3.0i automatic, with a combined cycle figure of 21.9mpg.

The XC90 will also be cheaper to insure than other premium SUVs. The Volvo XC90 D5 has been rated Group 15 (at least one group lower than any of the competitors), and the XC90 T6 is rated Group 16.

Both petrol and diesel XC90 models produce lower CO2 emissions than comparable competitor models with automatic transmission. The XC90 D5 turbodiesel with Geartronic transmission is the only vehicle in the premium SUV market with a CO2 figure low enough to qualify for a 33% BIK rating (inc. 3% diesel surcharge).

Hugh Reid, Volvo Managing Director said: "The XC90 is already ahead of the pack in terms of specification, price, design and versatility, and its fuel economy, low emissions and insurance groups now enhance its position, making it an even more attractive proposition.

"We have received more than 800 orders now - an unprecedented amount - since its world debut at the Detroit Motor Show in January."

This is a 19-year+ news article, from our Volvo archive, which dates back to the year 2000.

If in doubt check with your local Volvo dealer as car prices and technical data will have changed since 2002.