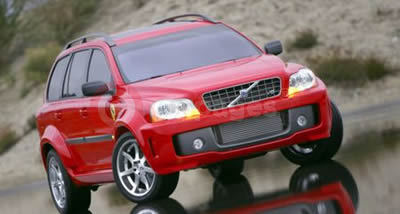 In line with the typically American taste for extremes, Volvo Cars North America (VCNA) unleashed three outrageous, one-off concept versions of the XC90, S40 and V50 at an aftermarket equipment show in Las Vegas - where else!

"This was such a fun concept," noted Vic Doolan, President and CEO of VCNA. "It has all the safety that Volvo is known for with the looks and performance of an exotic car. But this is just a concept to get the juices flowing and to get Volvo noticed by those who may not have considered Volvo before," he continued.

The new S40's modern design has been taken to extremes by Evolve Cars Inc., based in Southern California. Its custom-built body kit and trim are designed not only for appearance, but also to aid airflow to the S40 T5's 2.5-litre engine fitted with a larger turbo to produce an estimated 400+ bhp.

The most obvious and radical part of the Evolve S40's design are the 19in alloy wheels – 8.5in wide at the front and no less than 11in wide at the rear - a 3.5in dual exhaust system, Formula One style pushrod rear suspension, with an equally high-performance braking system, too.

Based on the standard V50 T5 AWD (All Wheel Drive), the V50 SV has been developed by Volvo's Special Vehicles team in Gothenburg, Sweden to firmly appeal to a younger generation who may not have previously seen Volvo as 'cool'. The exterior styling is based on a forthcoming Sport model and uses some styling kit, including 18in wheels, which are already available as accessories.

This is a 17-year+ news article, from our Volvo archive, which dates back to the year 2000.

If in doubt check with your local Volvo dealer as car prices and technical data will have changed since 2004.