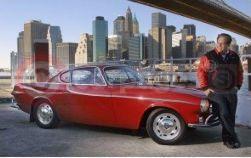 Irv Gordon, from New York, has become the first person to drive two million miles in one car, his 1966 Volvo P1800, and is coming to England to participate in Volvo’s anniversary event1 on Sunday 1 September at the Gaydon Heritage Centre in Warwickshire.

Irv "the two million mile man" Gordon, a 60-year old retired science teacher, bought his red P1800 in June of 1966. Since then Irv has driven the equivalent of four round trips to the moon, filled his Volvo with 6,400 tanks of petrol and has never let him down.

The car was entered into the Guinness Book of Records in 1998 as the vehicle with "the highest certified mileage driven by the original owner in non-commercial service", proving once again Volvo’s reputation for quality and longevity.

"Of the 260 million vehicles on the road in the United States, only a handful have accumulated one million miles," said Dan Werbin, president and chief executive officer of Volvo cars in North America. When questioned if he would be attempting to push his record up to three million miles Irv replied, "The car’s parts may be able to take it, but I’m not so sure about my own2."

Irv will begin his summer trip to Europe by visiting Volvo’s head office in Sweden where he will join in with further Volvo 75th anniversary celebrations along with his P1800. Before he arrives in the U.K.3 he will also call in on Germany and Belgium to introduce his car to some fresh terrain.

Volvo produced its first car in 1927, over 12 million Volvos later it is celebrating its 75th birthday. Volvo has opened factories in many different countries, including Malaysia, Holland and Thailand and now has the widest range of stylish models ever.

This is a 19-year+ news article, from our Volvo archive, which dates back to the year 2000.

If in doubt check with your local Volvo dealer as car prices and technical data will have changed since 2002.