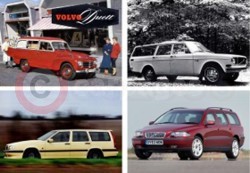 Not many realise that the Volvo estate success was started almost by accident. Faced with stocks of 1,500 spare chassis, Volvo’s co-founder Assar Gabrielson decided the company needed to solve a problem quickly, so the PV445 Duett was born – so called because the car was two in one; a flexible van during working hours and a spacious, comfortable passenger car during leisure time.

By 1969 Volvo produced no less than 90,000 Duetts, and the success of Volvo’s great estate car designs was in no doubt.

Then in 1967 the hugely popular 145 was introduced and Volvo estate cars started to become a familiar sight on British roads. Replaced by the 240 and 265 in 1974, and thanks to their production run of 19 years and 1,000,000 units, Volvo’s leadership of the premium estate car market was firmly established.

In 1985 the Volvo 760 estate car was launched having been designed as an estate car from the start – the saloon range coming later as a derivative of it. Various changes to the concept saw the V90 as the ultimate version, launched in 1996.

It was during the 70s and 80s that Volvos became associated with antique dealers, Labradors and green wellies and renowned as a practical and safe load-lugger. However, with the introduction of the 850 estate in 1993 the concept took on yet another dimension. Its daring, and since then much copied tail light arrangements, the performance T5 and T5R and an onslaught on British Touring Car Championships meant that Volvo estate cars would never be quite the same again.

And in 2000 the launch of the latest V70, a car which won more Estate Car of the Year Awards than any of its predecessors, marked the latest milestone on a long journey of estate car innovation and continuous improvement.

But the journey hasn’t ended – the launch of the Versatility Concept Car – a large, luxurious yet economical estate, showcased Volvo’s latest thinking in design and technology to ensure continued success over the next 50 years.

This is a 18-year+ news article, from our Volvo archive, which dates back to the year 2000.

If in doubt check with your local Volvo dealer as car prices and technical data will have changed since 2003.