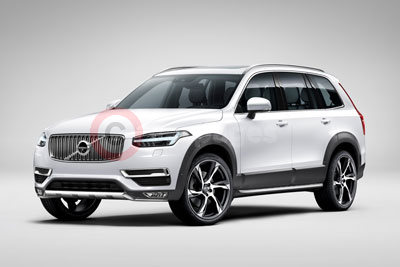 The all-new Volvo XC90 will go on sale in October with a price tag starting at around £45,000 for the entry level D5 AWD Momentum model, with the first deliveries expected in May 2015. Although a limited edition - XC90 First Edition model will go on sale on the 3rd September priced at £68,000 - which promises to be fully spec’d and will feature the D5 engine.

The second generation XC90 will officially be debuted at the Paris Motorshow in October of this year, where it is set to be the star of the show. It enters a much tougher market than when the first generation model was introduced back in 2002, when seven seater SUVs were not available. It will have to compete with the likes of the Audi Q7, BMW X5 and the Land Rover Discovery, both which offer seven seat configurations. The outgoing model had a good innings and still is a good family SUV but progress has left it behind on the tech and efficiency front.� So Volvo has spent under their Chinese ownership a staging £6.5 billion and three years on developing the new model, although future models in the range will share the XC90’s underpinnings.

There are a number of new powertrain options, including front-wheel-drive and a petrol hybrid T8 model for around £60,000. There are two new diesel engines, a 225 hp D5 twin turbo mated to an eight-speed automatic transmission with a combined fuel consumption of 47mpg� and a 190 hp D4 turbo offering capable of 56mpg in front-wheel-drive guise. The D4 will be available with the choice of either a six-speed manual gearbox or automatic transmission.

There will be the choice of three trim levels, ‘Momentum’,’ R Design’ and ‘Inscription’ - all cars are set to feature the tablet-like touch screen control console which controls all of the major features of the XC90 leaving the interior near button free. There will be Bowers and Wilkins audio equipment including the option of a 1,400 Watt Class D amplifier with19 speakers. There is also the option of air suspension with the choice of five modes, with the ability for the driver to tailor the settings to their own taste.

Volvo are claiming that the new XC90 will be their safest car to date with City Safe as standard across the range, plus the introduction of technology such as a run-off road protection package and auto brake at junctions which will stop the car if the driver turns in front of an oncoming car. There will be semi-autonomous driving with system that in stop - start traffic will automatically follow the vehicle in front.