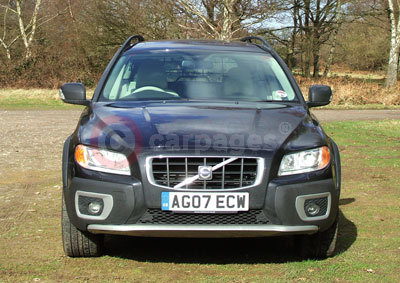 It is hard to believe that the XC70 has been around since 1997. Its launch was said to mark the arrival of a new car segment, one that combined a luxury estate with the off-road capabilities of an SUV.

The new XC70 remains true to the original format but has evolved somewhat over the years to become sleeker and less tank-like. A big hit in the USA, the XC70 sits amongst the more obvious off-roaders, the XC90 and the soon-to-be-launched XC60. XC is short for Cross Country and that is where it departs from the V70, on which it is based.

It is more than just an estate car with all-wheel-drive functionality, for when the bad weather arrives, as the V70 XC was. The XC70 is a different animal, a stand-alone vehicle with a ground clearance of 210mm (74mm higher than the new V70) and a wading depth of 300mm. For those who have an interest in off-roading, the descent approach, departure and ramp angles are 19.2-, 24- and 19.8 degrees, respectively.

It features an AWD system with Instant Traction that distributes torque to the wheels in various ratios in order to maintain grip. Under normal driving conditions, the XC70 is effectively front-wheel-drive until the various systems dictate otherwise. In addition, the XC70 has TRACS, an anti-spin system that works on individual wheels rather than axles, while Dynamic Stability and Traction Control (DSTC), momentarily cuts power to any wheel that begins to lose grip so it can regain traction, thus controlling potential skids.

For steady downhill traversing, there is HDC. Hill Descent Control is activated via a button and restricts downhill speeds to 6mph. It also works in reverse gear, which is handy for launching boats from a steep slipway and is very effective.

During the test, I made a note that I thought the steering to be a little on the light side but then I discovered, while investigating the information and set up facility, that the SE Sport has speed-dependent power-steering with three settings. A £225 option on the other models in the range, the system can be set to offer more or less assistance for low-speed off-road manoeuvre's or motorway journeys. The new XC70 also benefits from a Power Parking Brake (PPB) that switches itself off as the car is driven away.

The words Volvo and safety are synonymous and it is clear that the new XC70 isn’t lacking in either passive or active safety measures. Improved crumple zones, SIPS, WHIPS and an energy absorbing front end are just part of the deal. And, because of the increased ride height, Volvo have thoughtfully added a lower cross member to the front suspension so that if it is in a collision with a smaller vehicle, contact is made at the same height as that car’s deformation zone rather than above it.

This is a 13-year+ news article, from our Volvo archive, which dates back to the year 2000.

If in doubt check with your local Volvo dealer as car prices and technical data will have changed since 2008.

Volvo XC70 Images may not be UK specification cars. Colours and exterior and/or interior elements may differ from actual models.