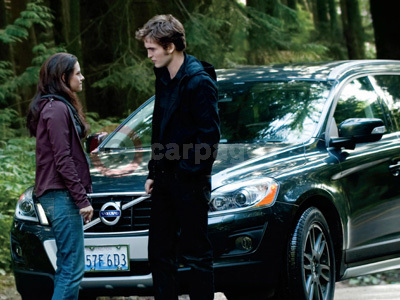 The Twilight Saga is one of the most popular film franchises and once again Edward Cullen drives a Volvo XC60.

Search on the Internet using the string "Volvo/Twilight/Eclipse" and you will get more than two million hits, including photographs and lengthy fan discussions of the exact colour nuance of Edward Cullen's Volvo. The interest is astonishing.

"The opportunity to participate in such a successful film franchise is a wonderful opportunity. Since Edward drives a Volvo in the novels, our participation is both credible and logical," says Oliver Engling, project manager for Volvo Car's "Lost in Forks" promotional campaign that is tied to the upcoming release of The Twilight Saga: Eclipse which opens across the UK on 9th July 2010.

In the novels, the hero Edward Cullen drives a Volvo S60R - the previous Volvo S60 model. However, when the time came to make the films, Volvo was no longer producing the Volvo S60R so a Volvo C30 was used in the first film and a Volvo XC60 in the next two.

Volvo Car's appearance in the first film in the franchise, Twilight, led to increased sales of the Volvo C30 at several Volvo dealers, particularly in the US market. After the release of The Twilight Saga: New Moon, dealers reported increased interest in the Volvo XC60 and noted that customers came to showrooms to photograph their children in the "Twilight car".

"Above all, of course, we are really pleased that the image of the Volvo brand has changed among many of the young people who in a few years' time will be our potential customers. They perceive the brand as attractive and one that stands out from the crowd," says Oliver Engling.

Volvo Cars has launched "Lost in Forks," an online competition to win a shiny new Volvo XC60 just like the one Edward drives in The Twilight Saga: Eclipse. Participants navigate a Volvo XC60 through the town of Forks following various clues along the way to decide which path is the shortest way to reach the Cullen House.