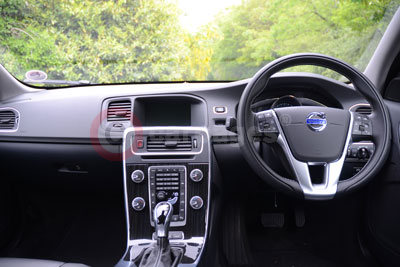 On the safety front it is equipped with the usual array of air bags, ABS, stability and traction control, which is pretty much the same as most cars but in addition there is City Safety which avoids low speed accidents up to the speed of 31 mph by automatically braking when a pending collision is detected in front of the car. It now includes Pedestrian and Cyclist Detection.

Safety belt pre-tensioners are standard in the front and outer rear seats, which is rare. The front seats are equipped with whiplash protection (WHIPS) to help prevent neck injuries.

Plus Volvo has addressed the issues that may be associated with Hybrid technology and it will automatically shut down the battery system and they have encapsulated it to protect the occupants from any threat in a collision.

Our test car was fitted with SENSUS Connect Touch with Nav which means we had access to a number of in-car apps which used a Bluetooth connecting phone as a modem. Apps included Spotify, TuneIn, there is also an internet browser which is a little tricky to use as you have to lean forward to touch the screen - it can also act as a Wi-Fi hot spot so other occupants can make use of your internet connection via your data contract.

Rivals What We Liked What We Disliked Conclusion

We enjoyed our time with the Volvo V60 Plug-In Hybrid and it was enjoyable being able to plug it in at night and then just waft off on your journey in the morning. The performance was more than adequate from a driving perspective, but sadly from a financial prospective it is just too expensive, when you consider that a similar V60 diesel would only cost around £35k but that is all that would put us off recommending it - if that doesn't bother you then it is an excellent package with the added 'hybrid' vehicle feel good factor.