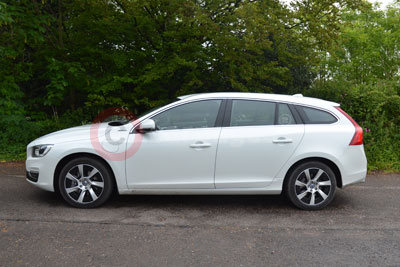 The V60 plug-in is certainly not lacking in the performance department with 0-62 mph delivered in 6.1 seconds in power mode. If you floor the throttle you will notice that there is plenty of torque on tap but that would probably defeat the car's green credentials but if you need it - it is there.

On the road the V60 is a comfortable place to be, especially on the motorway, it is only when you take the back roads that it feel a little un-composed, lacking the accuracy of let's say a BMW 3-series Touring but we think most owners are not going to care.

There may even be some concern from people who are worried about their car being front, rear - or all-wheel-drive - which of course the V60 Plug-In Hybrid is capable of - but to be honest most people are not going to notice unless they are doing something silly.

Interestingly the majority of the damper tuning was carried out in the UK due to its unique mixture of road surfaces, not too sure they went anywhere with pot holes though as the suspension is not that compliant.

We were able to get around 26 mpg in Pure mode before the diesel motor kicked in, which is not that bad as we live in rural Devon which equates to a lot of hills. Volvo's NEDC combined fuel consumption figure is recorded at 155.2 mpg in hybrid mode, i.e. when the car is fully charged (which of course is not free costing around £1.30 a charge or 30 miles) plus one gallon of diesel. Back in the real world over a distance of around 100 miles we were averaging around 75 mpg which dropped to around 45-56 mpg as the battery began to lose its charge.

You can ring fence the charge stored in the battery for later in your journey, perhaps when entering a congestion zone or when you are feeling a little smug - for some reason it always feels good to be under pure electric power, of course forgetting that it is not for free or without its own concerns about how the electricity it is generated.

If you travel long distances it is worth mentioning that the diesel fuel tank is only 45 litres which compares to 67.5 litres for a normal V60 due to the accommodation of the battery and electric motor - which may mean more time spent at the pumps. Volvo's figures quote a range of around 560 miles for the hybrid and 652 miles for a V60 D5 AWD.

Despite the low swooping roof line, getting in and out is an easy affair - and once in the V60 is a very comfortable place to be, the seats are near perfect and the controls are ergonomically laid out.

The electric driver's seat has a three memory position control, so finding the ideal driving position is an easy affair.

All round vision is good, but we were surprised at this price point that there isn't a reversing camera as some driver's may find the view through rear window a little challenging, although there are front and rear parking sensors - front park assist is an extra £325.

It is equipped with keyless entry, starting the car via a button - which if you are not careful can you take you by surprise, as when it starts under electric power it is virtually silent� and you might also take nearby pedestrians by surprise as they may not hear you.

A conventional V60's boot can carry between 430-1241 litres of cargo were the Hybrid's boot is reduced to between 310-1126 litres. As the battery takes up the space under the boot floor, the floor to ceiling height is reduced by around 60 cm - try explaining that to a greyhound.

Although our test car did come with £6,545 worth of optional extras, which included the £1,900 driver support pack, speed sensitive power steering at £225 and SENSUS Connect Touch with Satellite Navigation at £1295.