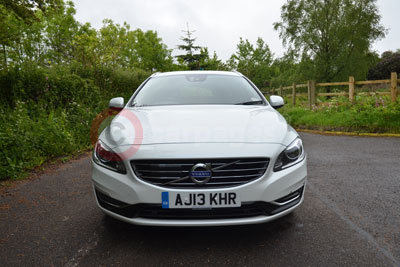 The Volvo V60 Plug-In Hybrid was introduced in 2012, with the first cars being delivered in 2013. The initial run of 1,000 cars sold out very quickly and it was not until the 2014 model year that the restriction was lifted - Volvo are now are expecting to sell around 8,000 cars world wide - with the UK purchasing around 150 a year.

The V60 Plug-In Hybrid is Volvo’s most technologically advanced model to-date - and I quote it is “an electric car, hybrid car and muscle-car all rolled into one. At the touch of a button, the driver can choose which of the three cars they want to drive at any given moment.”

Not too sure about the muscle-car - it is fairly swift but in reality it is a hybrid which can run under pure electric power from the grid or diesel from the pump - or a mixture of both.

This equates to 0-62 mph time of 6.1 seconds in Power mode and a top speed of 143 mph - under pure electric power the top speed is a respectable 78 mph.

It utilises a six-speed Geartronic transmission, which pretty much takes care of itself, there are no paddle shifts on the steering wheel but you can shift sequentially from the gear lever, should you wish.

The electric motor is powered from an 11.2 kWh lithium-ion battery pack installed under the floor of the boot, which is charged by plugging the V60 to a 240V mains socket (a 6, 10 or 16A circuit is required). There is also some charging input from the diesel motor whilst on the move.

It takes around 3.5 hours to fully charge the V60 if you have 16A 3-pin socket available, which increases to 4.5 hours with a 10A output and 7.5 hours with a 6A outlet. We were able to use 10A but did not time the charging cycle as we did this overnight. The charging cable plugs into a normal socket, then there is a regulator, which takes care of itself, selecting the number of amps it can draw automatically - and then there is a 3-pin plug on the car end, which is similar to a mains caravan power cable. This plugs into a socket under a flap on the front kerb side wing. The cable is locked into the car and cannot be removed until the car is unlocked - I know I tried and wondered what was going on - it makes perfect sense as it would stop someone maliciously unplugging the car.

You are able to select your required driving mode via three buttons on the centre console with the option of ‘Pure’, ‘Hybrid’ or ‘Power’ modes.