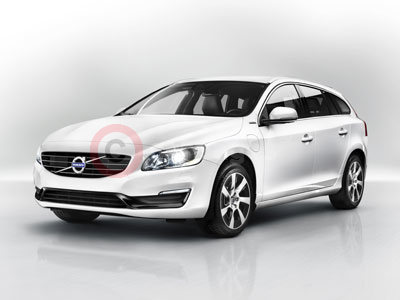 The Volvo V60 -Plug-in Hybrid will� remain exempt from the new London Congestion Charging structure under the newly confirmed Ultra Low Emission Discount (ULED) rules, when it comes into place on the 1st July 2013.

The new rules mean that cars must emit CO2 emissions of less than 75 g/km, which has reduced the number of eligible cars significantly.

The V60 D6 AWD is powered by a 215 hp diesel engine which drives the front wheels, while a 70hp electric motor drives the rear wheels. There are three selectable modes (Pure, Hybrid and Power) allowing the driver to dictate they want to drive. It can reach speeds of up to 78 mph in pure electric mode and has a range of up to 31 miles in this mode, subject to conditions and speed, etc. Under all-wheel-drive it will accelerate from 0-60 mph in 5.8 seconds with a top speed of 145 mph, which is very respectable - yet it has a CO2 rating of 48 g/km.

The 11.2kW lithium-ion battery pack that can be charged via standard UK household 3-pin plug, and subject to the battery condition the diesel engine will recharge the battery.

The V60 D6 AWD is well equipped with technology such as Active Bending Xenon Headlights with permanent high-beam and Cyclist Detection.

This is a 8-year+ news article, from our Volvo archive, which dates back to the year 2000.

If in doubt check with your local Volvo dealer as car prices and technical data will have changed since 2013.