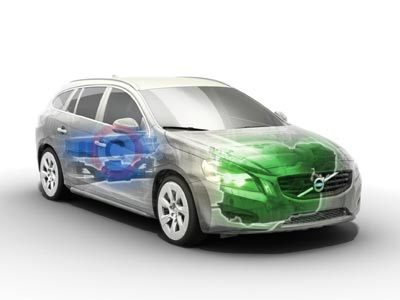 At the 2011 Geneva Motor Show, Volvo Cars will be unveiling the world's first diesel plug-in hybrid - a virtually production-ready Volvo V60 with carbon dioxide emissions below 50 g/km. The Plug-in Hybrid, which will be launched in the market in 2012, is the result of close co-operation between Volvo Cars and Swedish energy supplier Vattenfall.

The front wheels of the Volvo V60 Plug-in Hybrid will be driven by a five-cylinder 2.4-litre D5 turbo diesel, which produces 215 horsepower and maximum torque of 440 Nm.

The rear axle features ERAD (Electric Rear Axle Drive) in the form of an electric motor producing 70 horsepower, which receives its power from a 12 kWh lithium-ion battery pack. The car features a six-speed automatic transmission.

The driver chooses the preferred driving mode via three buttons on the instrument panel: Pure, Hybrid and Power. The interaction between diesel and electric power is handled via a control system.

The majority of all European car drivers cover less than 32 miles a day, for instance to and from work. On longer trips, the diesel engine is activated automatically, giving the car the same properties and range as a conventional hybrid.

The plug-in hybrid can be charged via a regular household electricity socket at home or elsewhere. Charging time is about five hours if the car is recharged at home.

The driver has the possibility to preheat or cool the passenger compartment during the recharging process. This means that more battery capacity can be used for powering the car. This pre-conditioning is programmed via a timer in the car's setup menu or remotely via a mobile phone. Via the mobile app, it also gives the owner access to a number of smart features, such as a reminder to plug in the charging cable if this hasn't been done at a certain pre-set time.

The instrument panel in the Volvo V60 Plug-in Hybrid has been modified to give the driver a full range of important information about diesel and electricity consumption, battery charge level and remaining range.