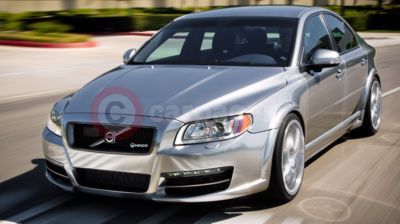 This year is Volvo’s fifth occasion at the annual SEMA show in Las Vegas and represents the most ambitious, creative line-up yet.  No less than five modified versions of Volvo models are on display; a beach-ready all-new Volvo XC70, a high performance version of the S80 T6, a striking C30 SportsCoupe, a powerful C70 convertible and a one-off fully custom hot rod.

Four of these concepts are based on production versions, while the hot rod is custom built from the ground up using major Volvo components from the previous-generation S80. Once again, Volvo worked with Heico Sportiv in Germany to build the S80 T6 HPC and Volvo C30, while Caresto built the C70 and hot rod. The Volvo XC70 concept, on the other hand, was conceived by the Volvo Cars design team and built by Aria, a concept car firm located in Irvine, California. Here is a glimpse of what each car is about:

Volvo XC70 Surf Rescue (SR) Volvo’s core value of safety is the driving force behind this exciting concept. Designed around the lifeguard vehicles seen on many California beaches, the XC70 SR rides above a 5-inch-lift suspension, with oversized tyres and heavily modified body panels. Inside is a host of life-saving equipment and custom rescue surfboards, while both the front bucket and rear seats have been recovered in wetsuit style neoprene ready for heavy-duty use. The 3.2-litre engine produces 235PS that is transferred through all four wheels via Volvo's electronically controlled all-wheel-drive system Heico Sportiv S80 T6 High Performance Concept (HPC)

Heico and Volvo are no strangers when it comes to SEMA, and the S80 T6 HPC is testament to how well both companies work together. The S80 T6 HPC features a 350-horsepower E85 bioethanol T6 engine that is routed through an all-wheel-drive system and accelerates from 0 to 62mph in 5.8 seconds. It’s outside, however, that the S80 T6 HPC really shines. A unique 7-layer “metal effect” paint scheme makes the car literally glow. Inside is a fully custom Mystic Blue leather interior with a sweeping aluminium centre stack that arcs seamlessly from the top of the instrument panel to the rear bucket-style seats.

Similar to the XC70 SR, the Heico C30 is inspired by surfing; this time from the unique surf pattern inlay found on the C30’s aluminium centre stack. Aside from the striking orange designs on the outside, the Heico C30 features a lowered stance, a fully custom body kit with integrated spoilers and larger air ducts. Quad exhaust tips hint at the 300 horsepower beneath the hood. Bright orange, high-quality leather seats and interior trim make this car nearly impossible to miss. The upgraded, turbocharged T5 engine powers the Volvo C30 producing 300PS and can accelerate from 0 to 62mph in 5.4 seconds, boasting a top speed of 155mph.

Built as a successor to the Caresto Hot Rod that made its debut at last year’s SEMA show, the Caresto C70 provides the ultimate convertible experience. Power output has been increased from 218 to 278 horsepower and torque has received a healthy bump from 236 lb.-ft. to 325 lb.-ft. from 1,500 - 4,800 rpm. The interior has been completely redone featuring hand stitched chestnut leather. Body modifications include new front and rear clips with distinctive brushed aluminium inserts around the fog lights and custom exhaust ports.

First shown at last year’s SEMA show, the Caresto Hot Rod was so well received Volvo Cars brought it back for the 2007 show as a complement to the Caresto C70 Convertible. Completely hand assembled from aluminium and carbon fibre, the Caresto Hot Rod features many Volvo parts, including the mid-engine 311-horsepower V8 engine. Craftsmanship is what sets the Caresto Hot Rod apart from many other custom cars. Precision fit and finish is evidenced on every body panel and stitch of premium leather.

Volvo S80 Images may not be UK specification cars. Colours and exterior and/or interior elements may differ from actual models.