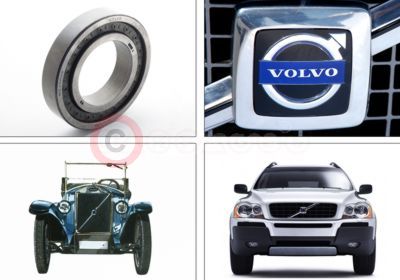 The 'VOLVO' brand name celebrates its 90th anniversary this month!

Like the best international brand names, 'Volvo' was cleverly chosen because it was simple, strong, and easy to spell and pronounce in all languages. It means 'I roll' in Latin, which was an appropriate name for the ball bearings from Swedish company, Svenska Kullagerfabriken (SKF), that officially registered the brand in Stockholm on 22nd June, 1915.

Eleven years later in 1926, an SKF employee, Assar Gabrielsson, was eagerly campaigning the SKF board of directors to produce a Swedish car. Together with his friend Gustaf Larson, an engineer who had worked for Morris in England, they finally obtained SKF's go-ahead and financial backing, along with some factory space and the name Volvo. After dismissing initial suggestions of 'GL' or 'Larson', after their names, the 'Volvo' brand was first used on a car, the ÖV 4 – nicknamed Jakob - in 1927, and has been used ever since.

Gabrielsson and Larson had a special attitude towards cars. As well as realising their potential benefit to humanity, even back in the 1920s, they realised the dangers and concern for human life, and founded safety as one of Volvo's core values with the imfamous quote: "Cars are driven by people; therefore the fundamental principle on which our designs are based must always be safety."

At the same time, Volvo also adopted its logo - the diagonal band and iron symbol - which are also still used today. The iron symbol, a circle with an arrow pointing diagonally upwards, was chosen for its association with strength and Sweden's iron industry, but also had the benefit of representing the god of warfare and the planet Mars in the Roman Empire, and the masculine gender.

In the 90 years since Volvo was first registered, it has become an international operation and globally respected brand. Volvo Car Corporation has stayed true to its original core value with a record number of innovations and developed an industry-leading reputation for safety. And 78 years later, approximately 13.5 million Volvo cars have been produced, of which an estimated eight million are still rolling.