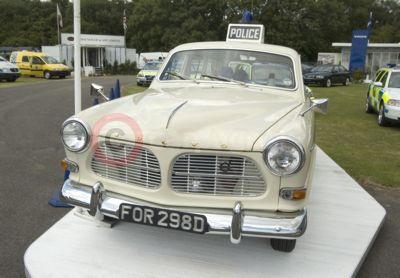 A 39 year old Volvo 121 Amazon estate police car which first came into service with the Hampshire and Isle of Wight Constabulary in May 1966 has been lovingly restored by Steve Woodward, a Traffic Officer with Hampshire Police. Purchased by the forces History Society the car is now back on the Hampshire Constabulary’s fleet.

Steve has spent almost 28 years as a policeman, 17 of them as a traffic officer driving Volvo police vehicles. This experience has led to his boyhood admiration for Volvo cars developing into a particular passion for ex-police cars. Steve’s collection also includes a 1985 Volvo 240 police car which he actually drove on patrol 20 years ago. The Volvo Amazon police car he is restoring, ‘FOR 298D’, was in service long before Steve began his career and it holds an important place in the history of police vehicles in the UK, which is why Steve reckoned the old girl deserved to be saved.

The Volvo Amazon 121 estate began Hampshire Police force’s 40 year relationship with Volvo cars. The first Amazon was brought into police service in July 1965, but met an unfortunate end whilst patrolling the Winchester by-pass. It was replaced in 1966 by Steve’s Amazon ‘FOR 298D’.

The decision by the Hampshire and Isle of Wight Constabulary to buy Volvos really hit the headlines in 1965 as they were the first foreign cars ever used by a British police force.

The force came under fire from the national press, car magazines and even prompted questions in Parliament! The controversial choice of a non-British made vehicle came about as result of the Hampshire force’s move towards a new type of car for accident work - one which was fast, could carry a large amount of equipment and was above all reliable. Of three makes of car tested (Humber Super Snipe estate, Citroen DS estate and the Volvo 121 Amazon) the Volvo proved to be the one that met all the new requirements the best. Today, every one of the UK’s 54 police forces has at least one Volvo on their fleets.

Comparing the 1966 Amazon with the Volvo V70 T5 police car he drives today, Steve says, ‘Fully loaded, the Amazon was a bit slow, so the engines were souped up a little by a local company called Ruddspeed in Arundel, which gave the car a top speed of 112 mph - pretty sensational for the mid 1960s. Today’s V70 police cars can carry a full load of equipment - 12 traffic cones, six Police Accident signs, first aid kit and major incident box - without comprising performance or handling.

‘As a traffic cop, I spend an average of 8-10 hours a day sitting in a car, so the comfortable seats in the V70 are an essential requirement. The seats have to bear the weight of a grown man, plus an extra 30 lbs of body amour and utility belt.’ Steve adds, ‘I’ve driven the Amazon and the seats are remarkably comfortable, even now. They would put some modern car seats to shame.’

Steve continues, ‘When the Amazons came into service, the Hampshire and Isle of Wight Constabulary at last had vehicles they could rely on, with minimal time off-road for servicing or repairs. It had five Amazons in total and without doubt they helped lay the foundation stones to a relationship that has now lasted for 40 years, which I think is probably unique. In my opinion, there’s no questioning the reliability of Volvos. They are on the road 24 hours a day and don’t keep our workshops too busy. We generally keep them in service for two and a half years, by which time they have usually clocked up 160,000 miles.’