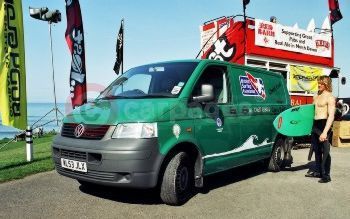 They may not quite have the waves of Bondi or the babes of California’s Laguna Beach, but places like Newquay, Croyde and the Gower peninsula are fast becoming the places to be seen as the weather hots up.

And as the rapidly-growing surf community heads for the beach, there’s still only one vehicle to be seen in: and that’s a Volkswagen.

Not only are the lanes that lead to the beach full of old Camper vans and Beetles; they’re also now filling up with newer ones, including the award-winning Volkswagen Transporter which was launched last autumn.

To reinforce this long-standing connection between the surf community and the Volkswagen brand, the British Surfing Association (BSA) has been supplied with a new Transporter by Volkswagen Van Centre Carrs of Truro in Cornwall.

The BSA will use the van to transport equipment and personnel to dozens of events throughout the surfing calendar. These will include the British National Championship at Tynemouth in October, and the British University Championship at Fistral Beach in Cornwall.

The BSA’s National Director (Finance), Karen Walton, negotiated the 12-month promotional deal. Talking at the recent European Inter Club Surfing Championship in Devon, Karen expressed her delight with the Transporter’s performance: ‘Obviously we like to use a Volkswagen vehicle as our sport has such a long history with the brand. But the van still has to be reliable and economical as it travels tens of thousands of miles during the year.

‘Over the past few months everyone who has driven the Transporter has remarked on its superb handling, excellent load space and fuel efficiency,’ she concluded.

Since its launch, the new Transporter has been riding on the crest of a wave, claiming a host of industry awards, including What Van? Van of the Year and International Van of the Year for 2004. A new range of sophisticated diesel engines employing Volkswagen’s highly acclaimed ‘Pumpe Düse’ unit injector technology, powers the new Transporter; while all-independent suspension ensures car-like handling responses, a comfortable ride, durability and a high payload.

Flexibility is key to the range with a number of bodystyles to choose from.

Volkswagen Transporter Images may not be UK specification cars. Colours and exterior and/or interior elements may differ from actual models.