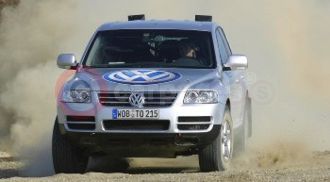 Volkswagen is undertaking intensive preparations for the forthcoming Cross Country season as well as the world’s most famous marathon event, the Dakar Rally which takes place between 1 and 18 January next year.

Former Dakar winner, Jutta Kleinschmidt, and her co-pilot Fabrizia Pons will drive a Volkswagen Race Touareg, which is being prepared in line with the prototype regulations. This development project, managed by Volkswagen’s Motorsport Director, Kris Nissen, will be co-ordinated from now on by the new Cross Country Centre (CCC).

Volkswagen has successfully completed an important phase of preparation three months before the Dakar Rally. The preliminary dynamometer runs have been completed, component assemblies for the future prototype have been tested ‘on track’, and the initial test results are ready for analysis.

Nissen, a Dane who has been Motorsport Director since July 2003, emphasised the progress made and the importance of the project, saying: ‘Volkswagen has taken on a large and exciting task. Logistics and race preparation are made under one roof since the formation of the Cross Country Centre (CCC). A works team will be systematically built up for this purpose. We will rely on resources in Wolfsburg for the duration of the entire development. The marathon project enjoys highest priority within the Volkswagen sport programme.’

All configurations of chassis and body were defined and implemented structurally under the leadership of Technical Director, Eduard Weidl. With the optimum classification of the Touareg, according to the motorsport governing body’s FIA T2 regulations, in mind, Volkswagen opted for a 2.3-litre five-cylinder TDI engine to power the vehicle. Subject to a factor of 1.5 for turbo diesel power plants, the Touareg is categorised in the class with a minimum weight of 1750 kg.

‘All the important requirements for the project’s success are given with these control parameters,’ stressed Nissen. ‘After the prototype has been rolled out, the first test is scheduled for November. The Touareg will have its baptism of fire during the Dakar Rally in January 2004. We want to be gunning for victory there in 2005.’

Volkswagen will sign a second driver team to race alongside Kleinschmidt and Pons for the Dakar Rally.