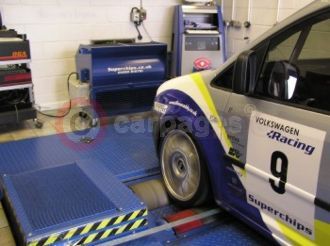 The Racing Caddy was already fitted with a more powerful engine than its road-going counterpart, yet by re-mapping the engine control unit (ECU), Superchips has increased maximum power by a staggering 85 bhp, to 230 bhp at 3,708 rpm, and optimum torque by a massive 140 Nm, to 470 Nm at 3,283 rpm. Still greater gains are to be found slightly lower down the rev range. At 3,492 rpm power is increased by 93 bhp, and at 3,377 rpm torque is increased by 187 Nm.

"These huge gains in power and torque make this one of our most impressive conversions ever," said Superchips managing director, Ian Sandford. "In many cases we achieve gains of 30 per cent and more, which is impressive enough, but with the Racing Caddy we’ve almost doubled that."

Sam Roach, managing director of Volkswagen Racing UK, added: "This is the most powerful diesel engine we have ever put on a circuit. The majority of the components are exactly as the road-going Caddy, but we’ve done a lot of work to the rear suspension to ensure strong handling."

The Racing Caddy, which is also fitted with a bespoke exhaust system by Milltek, was unveiled at the Birmingham Motor Show. Immediately afterwards it headed for its first outing at Snetterton in the fifth and sixth rounds of the VW Racing Cup, where it made an encouraging track debut in the hands of Peter Wyhinny, director of Volkswagen Commercial Vehicles. Out of 27 entrants, the Caddy qualified 15th on the grid and finished 17th in the first race and 12th in the second.

Anyone who owns a road-going VW Caddy TDI can benefit from power and torque gains of 30 per cent, for a cost of just £511.13 including VAT. Hundreds of other diesel and petrol models can also be Superchipped, and the cost for a non-turbo (normally aspirated) engine is only £293.75 including VAT.

The conversion can be carried out at any one of Superchips’ 85 dealers nationwide, or at the company’s headquarters in Buckingham. In some parts of the country, it can also be done at a customer’s home or place of work, courtesy of one of the network’s mobile units. In each case the job only takes around 45 minutes to complete. If required, Superchips can even arrange favourable insurance via its specialist broker, Firebond.