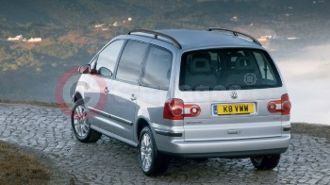 Fresh new styling and further improvements in standard specification have been announced for the Sharan, Volkswagen’s mid-sized MPV. All models now feature a new look to the rear, while the side indicators are integrated neatly in the door mirror housings, as already seen on other Volkswagen models such as the Touareg, Phaeton, revised Passat, New Beetle and new Golf.

In addition, all models now come with a curtain airbag system; 16" alloy wheels; plus front and rear parking sensors as standard. The Sharan was already one of the more generously equipped models in its class, with ABS; seven seats; air conditioning; electric mirrors and front windows; driver’s and front passenger’s airbags with front seat side airbags; and alarm with central locking all on the standard specification list.

With the three extra items, £1,135 of value has been added to the SE model, for example, yet prices have increased by only £7 on every model across the range.

The Sharan is the only MPV in its segment to have front and rear parking distance control as standard, a feature that will be greatly appreciated in a family vehicle of this type. It not only helps prevent minor car park knocks, but also helps make light work of manoeuvring in tight spaces.

Continuing the value-for-money theme, the SE model offers a number of features which are not normally found on other entry-level models in this class, such as integrated child seats and a six-speed gearbox.

Volkswagen also offers one of the broadest range of engines in the MPV sector, as well as the rare option of four-wheel drive, with its ‘intelligent’ 4MOTION system. Two economical ‘Pumpe Düse’ unit injector diesels are available, a 1.9 TDI with power outputs of 115 PS and 130 PS; plus three petrols: a 2.0-litre 115 PS, 1.8T with 150 PS and the range-topping 2.8-litre V6 with 204 PS.

Volkswagen Sharan Images may not be UK specification cars. Colours and exterior and/or interior elements may differ from actual models.