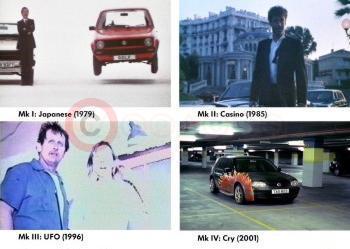 From the award-winning original Beetle adverts, which contributed enormously to the car’s success worldwide, to more recent campaigns such as a toy Polo being chased by an angry cat, Volkswagen’s television advertising is well known for its entertainment and originality.

As part of the fifth generation Golf’s launch campaign – and in recognition of its 30-year heritage – Volkswagen is taking over an entire advertisement break in March and devoting the airtime to classic Golf adverts. And to add an element of interaction to the event, fans can vote for their favourite adverts, with the most popular advert from each Golf generation being shown in the one-off special break.

The Golf has a particularly impressive history of memorable adverts. The Mk I dropping from a great height and landing next to an unperturbed Japanese commentator not only did much to demonstrate the car’s toughness, but kicked off 30 years of inspired advertising ideas. The second generation of Volkswagen’s best-seller saw a squeaky earring proving less reliable than a Golf; and who could forget the man who put a million on black, only for it to come up red? ‘Kinda like a V-Dubya’ was the phrase coined when two US deep southerners were convinced a UFO was visiting their town – so rare was the sight of a Mk III TDI at a filling station.

While Mk IV reflected on the car’s longevity and timeless appeal, and models crying because they hadn’t been ‘left alone’.

The special ad break will take place at 8.15pm on Monday 1 March on Channel 4. Appearing halfway through the well-regarded programme ‘Salvage Squad’, the Golf break will be like a programme in itself, and therefore an unusual event in UK television advertising history.

Concluding the break will be the advert for the latest Golf. Based around the theme ‘30 Years in the Making’, it shows a Volkswagen factory worker’s 30-year career at the company’s HQ in Wolfsburg.

Volkswagen has shortlisted the best three adverts that can be screened from each of the first four generations. Fans logging on to the www.volkswagen.co.uk site will be able to view stills from the 12 ads, and from today, vote for their favourite from each of the four models. The closing date for voting is 25 February.

In a similar vein, Volkswagen is also taking over the entire advertising of a forthcoming issue of the best-selling motoring weekly Auto Express. The special issue will feature old and new Golf adverts, and so promises to become something of a collector’s edition for Golf fans.

The new, fifth generation Golf was launched in the UK on 30 January, to critical and popular acclaim. Not only has it won outright the coveted What Car? Car of the Year Award 2004, but it is exceeding expectations in the showroom too, with customer orders well above target.