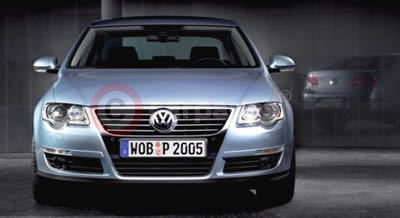 Volkswagen has released the first pictures of the sixth-generation Passat, ahead of its public debut at the Geneva Motor Show in March 2005.

Since its introduction in 1973, the Passat has established a reputation for the highest quality standards. This was taken to new heights with the launch of the 1996 Passat, whose interior quality reached levels previously seen only in much more expensive executive cars. The new generation increases Volkswagen’s lead in this area.

The new Passat has new four-link rear suspension, new transversely-mounted engines and a new body. Many technical highlights will be available, including a Bluetooth telephone unit and high quality sound system, plus, two firsts in this class: a standard-fit electronic handbrake, and a draught-free 2Zone Climatronic system.

Elements of both the concept C and concept R can be seen in the new Passat’s distinctive styling, in particular through the imposing chrome grille, which is set to become a feature of future Volkswagens. At the rear, fast-responding LED light units emulate the style of those at the front, with round sections.

The new Passat has grown in all key dimensions, with length up by 62 mm to 4.77 m; width up 74 mm to 1.82 m and height up 10 mm to 1.47 m. The wheelbase has also increased - up by 6 mm to 2.71 m - resulting in even greater interior space. Luggage has not been forgotten either, with maximum boot capacity growing by 90 litres to 565 litres. Another significant measurement is static torsional rigidity - in this respect the new Passat is 57 per cent stiffer than its already very good predecessor, making it a class leader.

UK prices and specification details of the new Passat will be released closer to the new model’s launch date in the summer.