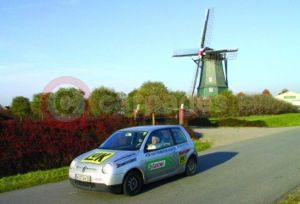 The Volkswagen Lupo 3L TDI has once again proved itself as the world’s most fuel efficient production car by setting yet another record. Gerhard Plattner, an Austrian journalist and economy driving expert, has, for the second time this year, entered the Guinness World Records™ Book in a Volkswagen. Earlier this month Plattner covered a distance of 2,910 miles through 20 European countries in a standard Lupo 3L TDI. He achieved his aim of completing this journey – which started in Oslo, Norway and finished in The Hague in The Netherlands – with just 100 euros worth of fuel. In fact, all he required was 90.94 euros, which corresponds to an average consumption of 2.78 litres per 100 km (101.6 mpg).

Plattner completed his first successful ‘100 euro eco-tour’ in August this year in a Polo TDI, over 1,944 miles through 15 European countries. The average fuel consumption set over this distance was just 3.95 litres per 100 km (71.5 mpg) with fuel costs of 90.89 euros.

Volkswagen Lupo Images may not be UK specification cars. Colours and exterior and/or interior elements may differ from actual models.