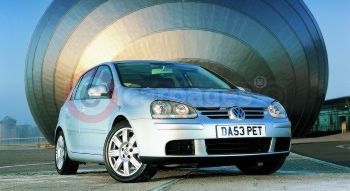 The all-new Volkswagen Golf was last night named Car of the Year 2004 by What Car?, the UK’s leading consumer motoring magazine.

The Golf, which went on sale last week, was chosen from the 18 category winners lauded in a glittering ceremony at the Hilton Hotel on London’s Park Lane.

It is the fourth time that the Volkswagen hatchback has scooped the honours in Britain’s ‘motoring Oscars’, but this all-new model is a huge improvement on its predecessors.

The winning Golf is the £14,205 1.6-litre FSi model, which What Car?’s expert testers praised for its excellent drive, spacious interior, refinement and equipment. The promise of strong residual values and low tax bills for company drivers also found favour with What Car?’s judges.

What Car? editor Rob Aherne said: "The best thing about the Golf is its big-car feel. It’s so refined and roomy that you could easily mistake it for a much more expensive car from the inside."

A Volkswagen spokesperson added: "The UK is an extremely important market for Volkswagen, and has become even more so in recent years through a succession of record sales.

"Volkswagen is therefore delighted that the experts at What Car? have voted the new Golf their Car of the Year, just as the first models are arriving in showrooms across the UK."

German cars dominated the running among the category winners. BMW won no fewer than four classes with cars as diverse as the new 5 series (Executive car) and Z4 (Roadster), and VW a total of three.

Renault claimed the coveted Safety award for its enduring commitment to driving up standards in crash protection, while Lexus took the Security award after its LS430 luxury car scored 100% in the magazine's annual theft-protection tests.