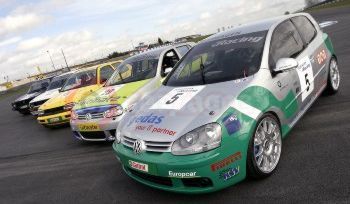 Croft, near Darlington, is the second circuit in the Volkswagen Racing Cup season, and marks the debut of the Golf Mk V Racer, which is powered by a modified version of the 2.0-litre TDI engine. Using Volkswagen’s highly sophisticated Pump Düse (unit injector) system, this new 16-valve diesel has been reworked by Volkswagen Racing UK to produce over 210 PS – that’s 70 PS more than the standard model.

The Golf Mk V Racer will be piloted throughout the season by a variety of different drivers. Putting the vehicle through its paces at Croft on its public debut will be 29 year-old Nick Trott, a freelance journalist who is relishing the challenge. Said Nick: ‘I’m really looking forward to taking part, especially in a Golf TDI – the low-down torque response should give it a noticeable advantage out of corners.’

Nick will be racing against a number of previous generation models: a pair of Golf GTI Mk Is (one of which is driven by the championship’s first female racer, 22 year-old Claire Tippet); one example each of the Mk II and Mk III, and a number of Mk IV models, including two TDIs and an R32.

Battling against the five generations of Golf in this exciting championship are a wide variety of race-specification Volkswagen vehicles, including Vento VR6s; Polos; New Beetles (including an RSi model driven by television presenter and journalist Jason Barlow); a Bora; a Scirocco; and the remarkable Caddy Racer – a 200 PS TDI van driven by Peter Wyhinny, Director of Volkswagen Commercial Vehicles UK.

The new Golf was launched in the UK on 30 January to great critical acclaim. It has so far collected the title of ‘Best Hatch’ from BBC Top Gear Magazine and won outright the prestigious What Car? Car of the Year award for 2004. Customer orders are running above target, with the Golf set for its second best year to date in the UK.