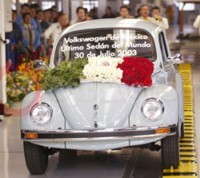 But New Beetle Goes From Strength To Strength!

With the New Beetle now a familiar sight on roads around the world, the last old Beetle is set to roll off the production line on Wednesday 30 July.

The start of the final production run was announced at a ceremony at the Puebla plant in Mexico, where both the New and old Beetles are built at the beginning of July.

Dr Jens Neumann, Member of the Board of Management of Volkswagen AG, gave the signal to start production of the ‘Última Edición’ (final edition).

The three thousand Última Edición Beetles have a 1.6-litre engine and come in Aquarius Blue or Harvest Moon Beige. Chrome trim strips, bumpers, hub caps and mirrors distinguish this Beetle from others. Neumann said that with the Última Edición, the Beetle would be showing itself at its best and added: ‘True stars, and their fans, know when it’s time to quit’.

The idea of the Beetle was born on January 17 1934, when Ferdinand Porsche wrote his ‘Exposé regarding the construction of a German People’s Car’. A people’s car or ‘Volkswagen’ should, he said, be a fully adequate and reliable automobile, with a light construction style. It should offer room for four peole, reach speeds of up to 100 kmh and be able to overcome gradients of 30 per cent. The first prototype was completed on February 5 1936. Mass production of the Beetle began in December 1945, and the first exports started in August 1947. July 1949 saw the first convertible Beetle, and the production numbers begain to soar.

In 1950, the 100,000th Beetle rolled off the line, and just five years later the millionth Beetle was produced. February 17 1972 was a key milestone: the 15,007,034th Beetle made this car a world champion, overtaking the previous production record held by the Ford Model T. By the time the final Última Edición is built, a total of 21,529,464 Beetles will have been produced, of which around 357,000 were sold in the UK.

The Beetle was not only sold almost everywhere in the world, it was also produced in no less than 20 countries, including Germany, Belgium, Ireland, Singapore, Nigeria and Peru.

The New Beetle will continue to be built at Puebla and charm fans around the world. In the UK too, the New Beetle, in both hatchback and Cabriolet guise, is performing well. Over 7,400 New Beetles were sold in the UK last year; while 8,500 will find homes this year. And since the launch of the entry-level 1.4-litre engine last month which costs just £11,295 on the road, the appeal of the car is wider than ever.