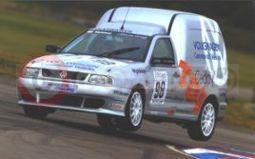 Motor sport history was made at Thruxton last weekend with the first-ever British race victory by a diesel car, in the shape of the Golf TDI. Not only that, but the final race of the Volkswagen Racing Cup season marked the debut of the first diesel van – a Caddy TDI – to take part in a competitive sprint race in the UK.

Michael Neuhoff and his Golf TDI drove their way into the record books, beating a host of petrol-powered machinery in the Volkswagen Racing Cup not once, but twice. Having qualified the Golf on pole position, Neuhoff battled all the way to the chequered flag in the first of the day's races, beating a 2.8-litre V6 petrol Beetle RSi by a half-second margin. In race two the diesel domination was absolute, Neuhoff racing to a 14-second victory. Along the way the TDI established a new lap record for the Hampshire circuit in this race series.

‘The Golf TDI seems to thrive on fast circuits,’ said Neuhoff, ‘and so we made some key suspension set-up changes to take advantage and found that the long sweeping corners of Thruxton were just ideal for the car. It's been fantastic fun getting to grips with a diesel racing car and developing it into a winner for the first time ever.’

The Caddy TDI Racer, in its first ever race, also demonstrated the viability of a diesel van in motor sport, with its power and impressive handling capabilities. Driven by Volkswagen Commercial Vehicles (UK) Director Peter Wyhinny, who competes in a national go-karting series, the track-developed Caddy made a big impression during the weekend’s racing.

Volkswagen Racing successfully boosted the standard 90 bhp TDI engine to an impressive 200 bhp – along with maximum torque of 264 lbs ft – primarily through the use of variable turbine geometry (VTG), larger versions of the injectors, pump and intercooler and a reprogrammed Electronic Control Unit (ECU). Though it failed to complete race one, it rolled home a creditable 16th in race two.

Peter Wyhinny was delighted with the van’s inaugural performance: ‘We’ve always known that the Caddy feels more like a car than a commercial vehicle from behind the wheel, and the TDI engine is a gem. But with these modifications it was a revelation around the track. Its reception at Thruxton, too, was delightful; the overwhelming enthusiasm for the Caddy surprised us all’.

Volkswagen leads the way in diesel technology. Its Pumpe Düse (PD or unit injector) engines can inject fuel at up to 2050 bar, compared with 1600 bar from the best common rail systems. This not only leads to greater efficiency and economy, but also class-leading performance, as epitomised by both the TDI Racer and the road-going 1.9-litre Golf GTI PD 150.

The Caddy TDI is one of the most practical small vans in its sector, and comes with all the benefits of Volkswagen’s renowned TDI technology. With 90 bhp and 155 lbs ft of torque, the Caddy can reach 103 mph yet deliver 49.6 mpg on the combined cycle with CO2 emissions of just 154 g/km. Last year its efficiency was underlined by winning the commercial vehicle category outright for the second year running in the RAC/Fleet World mpg Marathon, with an impressive result of 56.64 mpg.

Commenting on the weekend’s racing events, Sam Roach, Managing Director of Volkswagen Racing UK, said: ‘I think these victories prove that diesel power has arrived as a force with which to be reckoned in motor sport.’

This is a 18-year+ news article, from our Volkswagen archive, which dates back to the year 2000.

If in doubt check with your local Volkswagen dealer as car prices and technical data will have changed since 2002.