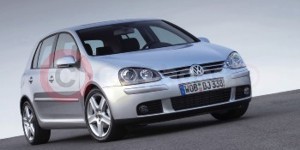 The Golf, the UK’s best-selling Volkswagen and the most successful German car ever, is to be launched in its fifth generation; and the first images of the new model are revealed today (23rd July 2003).

Since introduction over 30 years ago, more than 20 million Golfs have been sold, with each generation taking the car a big step forward and establishing new benchmarks in the class. Despite the changes, however, every generation has remained true to the Golf’s winning formula which combines classless style with market-leading quality, technology, safety and value for money.

The Golf Mk V is the biggest step forward so far in the evolution of the model, both visually and technically. The front end is completely new and designed to reduce further aerodynamic drag, while distinctive twin circular headlights with the glass tapering toward the centre of the car give a dynamic look. At the rear, the Golf Mk V has a strong visual presence with twin circular tail-lights, which have become an immediately recognisable feature of current Volkswagen design.

On the road, new suspension settings give a ride that is both sporty and comfortable, with the forthcoming Golf boasting a new multi-link rear suspension layout. A wide choice of innovative engines, featuring the latest FSI petrol and unit injector TDI diesel powerplants, will be available. They will drive through a six speed gearbox – with a direct shift gearbox (DSG) following later – and all will comply with Euro 4 emissions standards.

Both three and five-door hatchback models will be available, and though specification and pricing will be announced much closer to launch, a large number of safety features, including six airbags, active head restraints and three-point seatbelts, will be fitted as standard.

The new Golf will make its public debut at the Frankfurt Motor Show in September, with UK sales starting early next year.