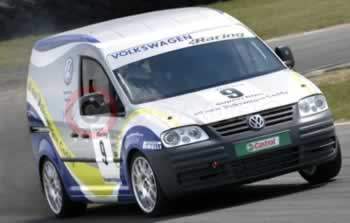 Volkswagen Commercial Vehicles is wowing the crowds at this year’s Volkswagen Racing Cup with the second generation Caddy TDI Racer. This exciting vehicle will be raced for the majority of this season by Peter Wyhinny, Head of Volkswagen Commercial Vehicles, continuing the immense success of its predecessor, the original Caddy TDI Racer. That vehicle is believed to be the first ever diesel racing van in the world, with top-ten finishes showing just how competitive a van can be.

The new Caddy has been built and developed by Volkswagen Racing at its Milton Keynes headquarters, using the advanced Volkswagen 2.0-litre TDI 16-valve engine – as seen in the new Golf GT TDI – but modified to give 231 PS and over 335 lbs ft of torque. This is the most powerful diesel engine that Volkswagen Racing has ever raced in the UK.

The very car-like driving dynamics of the standard Caddy have made the job of converting it into a racing vehicle surprisingly straightforward for Volkswagen Racing – indeed the majority of the van’s standard features have been retained for the Racer version.

The biggest challenge to the engineers was the fitment of the mandatory roll-cage into the van body, and the development of the rear suspension from a set-up designed to carry heavy loads into one which makes race-car-like handling its main priority.

One thing is for sure – the new Caddy will take over the mantle of the most distinctive racer on the grid from its predecessor, and it has already posted strong results in its first four races of the season. The highest position attained so far is 12th out of 25, with undoubtedly more to come in the season ahead.

Volkswagen Caddy Images may not be UK specification cars. Colours and exterior and/or interior elements may differ from actual models.