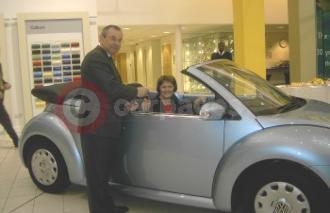 Caralyn Tottle from Loughton Lodge in Milton Keynes has become the proud owner of a New Beetle Cabriolet, following an annual prize draw by the Milton Keynes Community Foundation. Mrs Tottle was handed the keys to her new car, which was donated by Volkswagen Group UK, at an evening event held at the company’s head office in Milton Keynes.

The prize vehicle, a 1.6-litre Cabriolet in metallic Speed Blue, was on display over the festive period in the Milton Keynes shopping centre, thecentre:mk, drawing a large amount of attention from busy shoppers.

In addition to the tickets sold at thecentre:mk, this year a record 115 charities and local groups participated in the draw, all selling tickets and bringing the total raised to £50,410. Since 1989 the raffle has been a major fundraising event for the Milton Keynes Community Foundation and has generated £544,383 for local charities and community projects.

Robin Woolcock, Managing Director of the Volkswagen Group, who presented the prize car said: ‘This is the 15th year we have been involved with this project, and we are extremely pleased to offer our continued support. It is a win-win situation for all involved, and it’s great that the main people to benefit are from the local area.’

Every year the Foundation supports over one hundred community projects that benefit the whole community, including people with special needs and other disabilities, children and youth, older people and projects that develop the artistic and cultural life of the city.

The New Beetle Cabriolet was launched in the UK in May 2003, and has proved extremely popular with customers attracted to its looks, practicality and value for money. It is available with five engines ranging from a 1.4-litre petrol priced at £14,430 RRP on the road, to the range-topping 1.8T with 150 PS. A 1.9-litre TDI diesel with 100 PS is also available.

Since launch the New Beetle Cabriolet has won a series of awards including Best Convertible in the Auto Express New Car Honours, as well as the What Car? Best Convertible title for the second year in a row.