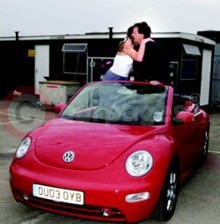 Sir Paul McCartney surprised 19 year-old fan Laura Andrew with a gift of a new Volkswagen Beetle Cabriolet, just before the final concert in Liverpool of his ‘Back to the World’ tour on 1 June 2003.

The famous musician presented her with the New Beetle Cabriolet, as she was the two millionth audience member of his concert tour. McCartney climbed into the Beetle with Laura and would probably have taken his overwhelmed fan for a drive around the dockyards, if he didn’t have to prepare for his concert immediately afterwards.

Laura’s example was in Sundown Orange, an exact match of a colour used for much earlier Beetles. ‘Just the right colour – it was also a hit in the Sixties’, said Sir Paul.

Volkswagen UK faced a problem when it was requested to supply a right-hand drive Beetle Cabriolet as it has sold its allocation of the popular model for the next five months. The solution was to make available a new example of one of its own demonstrators.

Laura, who reads tourism and leisure at Liverpool University, wants to keep the cabriolet for the rest of her life. Paul had signed the inside panel of the right door: ‘For Laura. Well done. 2 Millionth. Love Paul McCartney.’ She received offers for the car immediately after receiving the keys but promised: ‘I’ll never give this car away.’