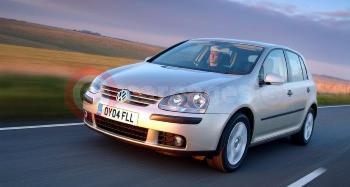 Volkswagen’s new Golf has got off to a flying start in the UK, exceeding sales expectations while collecting top awards along the way.

Yesterday, the new Golf was presented with the title of ‘Best Hatch’ by Jeremy Clarkson and editor Michael Harvey at the BBC Top Gear Magazine Awards 2004 in London. This follows the new Golf’s outright victory at What Car? magazine’s prestigious Car of the Year Awards 2004 earlier this year. The two magazines, along with a host of other motoring experts, have praised the latest generation of Volkswagen’s best-seller for its comprehensive range of talents and high quality feel.

Customers seem to be in agreement with the road-testers, as orders are currently running at around 20 per cent above target. As supply builds and new variants join the range – these include the 2.0 SDI, 2.0 TDI with DSG gearbox, plus three-door models – sales are projected to increase further.

UK sales of the few remaining Mk IV models were also very strong in January and February which, when combined with strong early sales of the new model, have made the first two months of 2004 the best YTD figure for the Golf so far. Indeed, at the current rate, the Golf is set for its second best year to date in the UK.

This is all the more remarkable when it is noted that the most famous Golf of all – the GTI – is not due to arrive until the end of this year. The forthcoming version, previewed as a concept at last year’s Frankfurt Motor Show, will hark back to the much-loved Mk I version, with a red surround to the grille, racy interior and classic ‘GTI’ badging. Its 200 PS FSI turbocharged engine will appeal to keen drivers, as will a more sporting set-up of the new Golf’s highly-praised chassis, which features multi-link rear suspension.

As with the previous generation, a high-powered diesel is the top selling model. The potent 2.0 GT TDI, with 140 PS, has accounted for over a quarter of all sales for the year to date. The Golf Mk IV sold in greatest numbers with the TDI 130 PS engine, and was the UK’s top-selling diesel car in 2002.