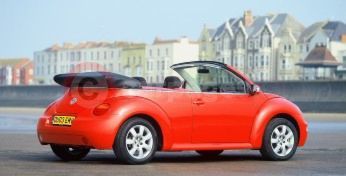 An eye-catching convoy of red New Beetles will be touring the streets of London on April 1, celebrating the launch in paperback of Mark Haddon’s award-winning novel, The Curious Incident of the Dog in the Night-time.

Volkswagen, in conjunction with publishers Vintage, will be promoting the arrival of the paperback by driving five New Beetles and five New Beetle Cabriolets – all in bright red – around the heart of the capital on April Fool’s Day.

The novel, which has won the Whitbread Award, The Guardian Children’s Fiction Prize, the Booktrust Teenage Prize and the Gold Audiobook 2003, is written from the perspective of Christopher Boone, a 15-year old boy with autism. His favourite colour is red, and if he sees five red cars in a row, then it means ‘it is going to be a Super Good Day’.

The two groups of five cars will be passing some of the most prominent places in London, such as Hyde Park Corner; Piccadilly Circus; Shaftesbury Avenue; Trafalgar Square; The Mall; the King’s Road; Parliament Square and St Paul’s Cathedral.

At around 11.00 am five New Beetles will be outside Foyles bookstore on Manette Street, just off Charing Cross Road, for a photo call with the author Mark Haddon.

The New Beetle is among the most distinctive and loveable cars on the road.

The range starts at £11,490 ‘on the road’ RRP with a choice of five petrol and one diesel engines, and an impressive level of standard equipment including ABS and ESP (Electronic Stabilisation Programme); twin front and side airbags; a CD player; and remote central locking with alarm.

The New Beetle Cabriolet was launched in the UK last year, and has proved extremely popular with customers attracted to its looks, practicality and value for money. Since launch it has won a series of awards including Best Convertible in the Auto Express New Car Honours, as well as the What Car? Best Convertible title for the second consecutive year.