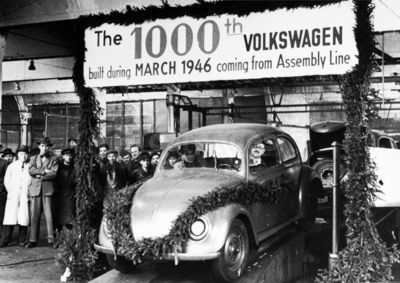 Fifty-five years ago, on 8 October 1949, the British military government placed the trusteeship of the Volkswagen factory in German hands. To commemorate this event, a ceremony was staged by the minister-president of Lower Saxony Christian Wulff and the chairman of Volkswagen AG Dr. Bernd Pischetsrieder on 6 October in the gallery at Hanover’s Herrenhäuser Gärten.

The hosts and the British ambassador, Sir Peter James Torry, spoke to 220 leading figures from German and British politics, business and the media. The guests included the highest ranking officer of the British forces in Germany, Major General Wall, as well as representatives of the Royal Electrical and Mechanical Engineers (REME) from Great Britain and Germany.

In 1945, it was a REME major, who, acting on the orders of the British military government, set the Volkswagen factory on course for the future. Major Ivan Hirst ensured that civilian production of the Volkswagen saloon could be started in December 1945, a move akin to the British founding the factory a second time. Initially aimed mainly at the occupational forces, Volkswagen cars built in Wolfsburg soon attracted interest among private customers and people abroad.

The first exports to the Netherlands in 1947 and the set-up of efficient sales routes quickly opened new markets for the company operating under British supervision.

In the year that the factory passed into German hands, the workforce of 10,227 produced 46,154 Type 1 cars, of which 7,128 went abroad. That was no simple task, as Dr Bernd Pischetsrieder explained: ‘The courage and vision of those responsible at the time and the culture of hard-work they lived in are also an inspiration and model for our challenges today.’

The British officer and engineer Ivan Hirst was decisive in steering Volkswagen into the fast lane. He set high quality standards to make the Volkswagen saloon suitable for the world market and he created close ties with customers by setting up an extensive service network. The Volkswagen culture of participation is also down to the British who allowed the first free elections for employee representatives to be staged in November 1945. These British roots have therefore left their mark on the company to this day. In this context, the CEO thanked the British for their involvement: ‘The fact that Volkswagen could be built on British foundations is down to active figures of integrity for whom the success of Volkswagen as a company was more important than their own gain.’

Upon transferring the factory into the trust of the German government and passing on administration to the State of Lower Saxony, the British laid down the regulations that would later form the basis for the Volkswagen law.

Britain still plays an important role at Volkswagen Group today: the United Kingdom is one of its most important markets as over 340,000 vehicles were delivered there in 2003. In 1998 Bentley, a top British brand that sets royal standards in terms of design and equipment, also joined the group. Between 1945 and 1949, the British with their orientation to the world market laid the foundations for the later success of the global player Volkswagen based in Wolfsburg.

Dr Bernd Pischetsrieder concluded: ‘Volkswagen is proud to have been part of German-British friendship history.’