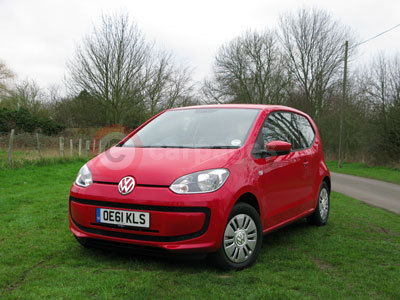 Volkswagen calls its oddly-named up! a ‘cleverly compact’ car and it seems an apt description. This three-door, four-seater city car made its UK debut in March 2012. It did so to instant acclaim, including being named as one leading motoring magazine’s Car of the Year.

This pert little hatchback is Volkswagen’s bargain basement car, the least expensive model that its maker produces. It could justifiably be described as a new ‘people’s car’ for the cyber generation. It is one of those vehicles that contrives to feel roomier inside than its very modest exterior dimensions suggest. This diminutive motorised Tardis is taller, slimmer and more than a foot shorter than a modern MINI. It is less than a foot longer than an original Mini.

In the current economic climate, downsizing is a popular trend, and many small cars are bought by older motorists. Doubtless some will be wooed by this new baby VW, but the up! seems to deliberately court a younger generation of drivers, to whom its trendy lower case name with an exclamation mark punctuating it will seem pretty normal. So maybe it is an apt name to appeal to a thumb-dexterous generation of new drivers.

There are four models in the up! range: the Take up!, the Move up!, the economy-conscious Move up! Blue Motion Technology, and the elite High up!  All have the same engine: a one-litre, three-cylinder petrol unit with a five-speed manual gearbox.

The top speed is a comparatively modest 99 mph – it is very unusual for a modern car to be capable of less than 100 mph flat out. Acceleration is a little on the leisurely side too, taking 14.4 seconds from stationary to the benchmark 62 mph. Those bald figures belie the way the car feels. It is relatively light in weight and feels quite lively and responsive, whatever the figures may say. Well, for a city car, anyway. But it can still hold its own on a motorway.

Volkswagen up Images may not be UK specification cars. Colours and exterior and/or interior elements may differ from actual models.