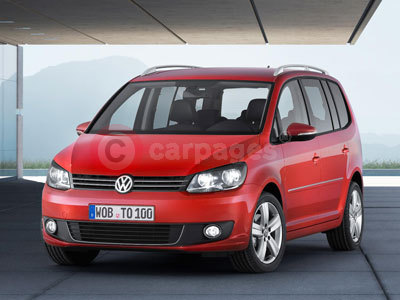 The new Volkswagen Touran has been unveiled at the 2010 Leipzig Motor Show. Featuring fresh styling, pioneering technology and a range of efficient new petrol and diesel engines, the new Touran is set to build on the strong reputation of the 1.13 million examples of the compact MPV sold across Europe to date.

The new Volkswagen Touran features styling that takes inspiration from the design direction established by the Volkswagen Polo, Volkswagen Golf and new Volkswagen Touareg. The new grille features strong horizontal lines that are replicated in the new front bumper while at the rear, revised tail-lights featuring intricate LED bulbs are fitted along with a new tailgate and bumper. Completing the revisions are a set of new alloy wheels and chrome-edged rubbing strips running down the side of the vehicle.

Inside the Volkswagen Touran, fresh new trim finishes are joined by a three-spoke steering wheel ahead of a new set of dials featuring subtle white backlighting and a large electronic display to relay information on the vehicle's systems. A revised centre console with chrome highlights houses new controls for the ventilation system.

The versatility that has led to the Touran establishing a loyal customer base has been retained in the new car. The new Volkswagen Touran is fitted with seven seats as standard, the third row of which can be folded down into the floor of the vehicle to leave a 695 litre loadspace that can be increased to 1,913 litres when the centre row of seats is folded. A total of 39 storage compartments can be found around the new Volkswagen Touran.

The diesel range comprises two engines with four different power outputs. A 1.6-litre TDI engine is available with a choice of 90 or 105 PS outputs while the 2.0-litre TDI engine offers 140 or 170 PS. In addition, the 1.2 TSI 105 PS petrol and 1.6-litre 105 PS diesel engines can be specified in BlueMotion Technology trim complete with Start/Stop and, in the case of the latter, the ability to return 61.4 mpg on the combined cycle - making the new Volkswagen Touran the most efficient MPV Volkswagen has ever produced.

In addition to the gains in efficiency, the Volkswagen Touran also breaks new ground in technology, featuring, for example, the latest generation of ParkAssist which allows the vehicle to park in not only parallel spaces but also end-on spaces. The system operates through a single button and doesn't require any complicated set-up procedure.

The new Volkswagen Touran will go on sale in the UK in September 2010 with the first models arriving in October 2010. Prices and specifications will be announced nearer this time.

Volkswagen Touran Images may not be UK specification cars. Colours and exterior and/or interior elements may differ from actual models.