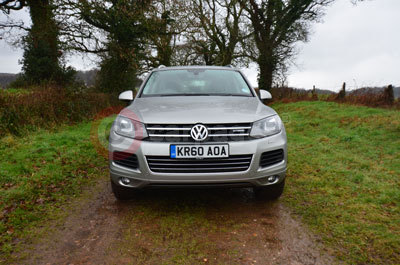 The original Volkswagen Touareg was launched in the UK in 2003 and was face-lifted in 2007. Since its launch over 500,000 vehicles have been sold worldwide.

The new Volkswagen Touareg debuted at the Geneva Motor Show in February 2010, with the first cars going on sale in October 2010. The Touareg has been totally redesigned and now weighs 200kg less, is 40mm longer and is up to 20 per cent more fuel-efficient.

As with all Touaregs’ the Hybrid is equipped with an eight-speed automatic tiptronic gearbox that has been especially modified for the Hybrid power train. Overall we found it very responsive and intelligent, rarely being caught out with the ability to adapt to our different driving styles.

The Hybrid system takes some getting used to, the number of times we thought the car hadn’t started because it was on purely electric power at first this was a little bit disconcerting (it does tell you though). We loved being able to drive purely on electric power, you can do just over 30 mph and there is a limited range of around 1.2 miles but we are sure that we got it to go a little further with some downhill runs. However, you do have to beware of pedestrians who will not hear you. Despite the size of the Touareg we took a number of people by surprise, especially in supermarket car parks, we also got some very odd looks wondering why there was no real noise from the vehicle.

You can set the central information panel (navigation screen) and the TFT screen between the speedometer and rev counter to display exactly what the hybrid system is up to.

Official fuel economy figures are quoted as urban 32.5 mpg, extra-urban 35.8 mpg and combined 34.4 mpg, which compares to 40.4 mpg combined for the 3.0 V6 TDI.  On average we achieved 23.6 mpg on a mixed journey of A and B roads and when touring with a light foot this increased to 27 mpg. Of course we would like to see real life figures meeting the official ones but in return for the performance of the Hybrid engine over the noisier and smellier diesel engines we might forgive it a little.

The Volkswagen Touareg is currently exempt from the London Congestion Charge and the CO2 emissions are rated at 193 g/km which does not make it on the best side of green.

More about the VW Touareg Hybrid and how it works

The principle drive unit of the Touareg Hybrid consists of a supercharged petrol V6 TSI engine (333 PS) coupled to an eight-speed automatic transmission customised for the hybrid, towing and off-road use, including torque converter, final drive units and centre differential, as well as the Hybrid module integrated between the internal combustion engine and the automatic transmission.  This module, the heart of the hybrid contains an E-motor (generating 47 PS) and a disengagement clutch.

When the V6 TSI and E-motor work simultaneously at full power (known as boosting), a system power output of up to 380 PS and maximum torque of 580 Nm (428 lbs ft) are delivered.

The drive energy for the E-motor is stored in a Nickel Metal-Hydride (Ni-MH) battery at the rear of the Touareg, in the spare wheel recess.  With its nominal voltage of 288 volts, the battery has an energy capacity of 1.7 kilowatt-hours (kWh) and a peak power output of 47 PS.  The energy stored in the battery is sufficient to drive the Touareg over a distance of approximately two kilometres and up to a speed of 31 mph in pure electric mode.  The interplay of the individual system components is co-ordinated by the ‘Hybrid Manager’.

Volkswagen engineers chose a parallel hybrid drive configuration for the Touareg as it enables off-road capability and unlimited climbing ability plus it is also more efficient than alternative hybrid concepts on long-distance and motorway journeys.

Compared to a conventional SUV of the same size and power, the hybrid concept delivers fuel savings of up to 25 per cent in city driving.  In combined mode driving a mix of city, A-road and motorway drives development engineers calculate an average saving of 17 per cent.


Electric Driving: Emission-free driving at speeds of up to 31 mph by pure electric power which in turn reduces petrol consumption.  In this case, the petrol engine is not only shut off, but is also disengaged from the eight-speed automatic gearbox via the clutch system to avoid drag torque losses.

Coasting: As soon as the driver releases the accelerator pedal, the V6 TSI is disengaged from the transmission. This is even possible at higher speeds of up to 99 mph as well.  The Touareg can coast for significantly longer, since drag torque losses are eliminated.

Battery Regeneration: During braking, the E-Motor – now operating as a generator – recovers kinetic energy, which is then stored in the high-voltage battery (NiMH battery).

Stop/Start system: All V6 versions of the new Touareg are equipped with a standard Stop/Start function and naturally this also includes the Touareg Hybrid.  The Stop/Start system integrated into the power train improves fuel economy, especially in urban areas and slow traffic.

Overall we liked the refinement of the Volkswagen Touareg Hybrid, we liked being able to run on electric power albeit only for a short distance. We also liked the power and acceleration but were not too keen on the fuel consumption.