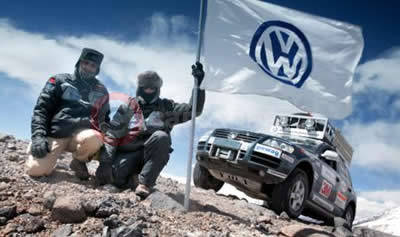 The Volkswagen Touareg has confirmed its off-road prowess once again by setting a new world altitude record for a motor vehicle of 6,080 metres. This achievement, undertaken in a standard-engined Touareg 3.2-litre V6, has been officially recognised by the Guinness World Records™ Book.

On 29 January in Chile, battling against icy winds and a lack of oxygen, the Touareg expedition team fought its way through the lunar landscape of the Ojos del Salado, the world’s highest volcano, to achieve the record.

An altimeter and GPS system displayed the result of 6,080 metres. This is the highest point on the surface of the Earth that a vehicle can reach and safely return from. The Touareg has therefore proven its abilities in extreme conditions and surpassed the performance of all other off-road vehicles.

The route of the team of eight, headed by expedition leader Rainer Zietlow, first took them through the Atacama desert, the world’s driest area. The base camp is located at 4,400 metres above sea level above the salt lake Laguna Santa Rosa, famous for its pink flamingos. From here the trail continues over stones and pebbles with an 80 per cent gradient, snow fields and soft volcanic sand. At the wheel of the Touareg was Ronald Bormann, previous winner of the European Truck Trail competition.

In sections where large rocks blocked the path, a winch, fitted as standard to the Touareg Expedition, a special edition version currently not offered in the UK, helped the team on its way. Spotlights fitted to the roof rack, which also accommodates spare wheels and rescue equipment, lit the way through the night to the rock-strewn summit. As the air became thinner at 5,000 metres above sea level, the crew was given additional oxygen by altitude specialist Dr Rainald Fischer, in order to ward off potentially life-threatening altitude sickness.

The Institute for Cartography at the University of Dresden helped to select the route to the summit following a recent four-week survey of the summit region for the purpose of making new maps. The knowledge gained by the expedition will help the cartographers verify their work.

However, the most important scientific aspect of the expedition to a region endangered by earthquakes and volcanic eruptions was the installation of a seismographic station, managed by the Geological Research Centre in Potsdam.

This station makes it possible to register eruptions directly above potential earthquake sites, thus advancing global research in this area.

Whether in town, on country roads or the motorway; as a service vehicle at the Dakar rally; a globetrotter in the ‘Touareg 360° experience’ circumnavigation of the world; or as an expedition vehicle used for scientific purposes - the Touareg is always more than capable of meeting the challenge.