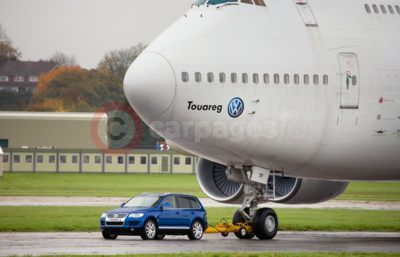 The vehicle was a standard production Touareg fitted with a special towing adaptor to connect it with the aircraft towing link and loaded with 4.3 tonnes of metal ballast to bring its total weight to just over seven tonnes (7,030 kg) including the driver, an engineer from the technical department at the company's headquarters in Germany.

The car's engine, self-levelling air suspension, wheels, tyres and structure were all standard.  One precaution that turned out to be unnecessary was the fitment of the 4.56 axle ratio from the Touareg V8 model in place of the 3.27 gearing of the V10. This was established as the demonstration was conducted in the second of the Touareg's 12 forward gears rather than first.  The final modification was to change the outer body panels for photographic purposes so that this example was visually the same as the next generation Touareg which is due to be launched next year.

The attempt was designed to demonstrate the reserves of strength and durability of the Touareg V10 TDI.  This model won The Caravan Club Towcar of the Year Awards full-size 4x4 category in 2004 and 2005 and has established itself as the benchmark diesel SUV, offering an extraordinary combination of performance and fuel efficiency since it was launched in 2003.

A theoretical towing capability in excess of 200 tonnes was calculated by multiplying the 553 lbs ft of torque generated by the V10 TDI engine through the standard transmission's lowest ratio and without taking into account the torque multiplication benefits of the torque converter.  This however assumed a dry surface and loading the Touareg's body and suspension well in excess of its rated limits.

An initial trial was carried out successfully in Germany with an operational Boeing 747-400 weighing 190 tonnes but it subsequently became difficult to obtain an aircraft for the length of time and in an appropriate location to conduct a press demonstration.  Colleagues therefore requested Volkswagen UK to obtain a suitable aircraft and location.

The result was an ex-British Airways Boeing 747-200 weighing 155 tonnes.  The aircraft, first flown in 1980 and retired last year retains its full complement of 500 seats, 11 toilets and complete landing gear, albeit without an operating braking system.  The original engines were removed last year to make way for dummy items used in the filming of a recent motion picture.  Despite this, the aircraft still weighs 155 tonnes, due in part to the 28 tonnes of water held on board in the fuel and nose tanks.

The changes to the Touareg are more modest.  Modifications extend to the addition of 4,345 kg of ballast in the form of steel plates set behind the front bumper and beneath the engine.  The balance of the ballast was made up by bags of steel balls weighing 25 kg each. The result is a split of 2,755 kg over the front axle and 4,275 kg over the rear to bring the total to 7,030 kg which includes Uwe Krieghoff, the nervous driver.  He was not prepared to say how much his body contributed to the 7,030 kg total.

Conditions for the attempt were far from perfect.  A strong headwind combined with torrential rain and resulting standing water prompted concerns over traction on the wet surface.  Despite the scale of the attempt the vehicle needed little preparation.  The engine was warmed up before a brief visual inspection of the tyres prior to the attempt being given the green light.

The Touareg's standard towbar (fitted with an adapted towing bracket) was hooked up to the nose wheel collar of a Boeing 747 and the chocks were removed.  At the wheel Uwe selected 'drive' and the low ratio, second gear setting on the Touareg's six-speed gearbox.  The required tractive effort is at its highest during the initial pull to overcome the static friction of the aircraft tyres on the runway.  Flatspots form on the aircraft's 18 tyres under the 155 tonnes of weight and additional resistance must be overcome to get the aircraft rolling.

Uwe pressed the accelerator around halfway down in second gear before easing off as the aircraft gained momentum.  With no visible loss of traction the Touareg began dragging the 231 ft airframe of the 747 along the runway, maintaining an even five mph in the process.  Having covered an estimated 150 metres the driver eased back on the throttle before slowly engaging the Touareg's brakes to slow both the vehicle and the aircraft to a stop.

After the attempt Uwe commented: 'I was a bit disappointed we couldn't find something heavier to tow as it was a bit too easy!  If anyone could lend us a heavier aircraft then please let us know.'

The vehicle was checked after the repeated runs and no side effects of the demands made on the engine and transmission could be found.  The engine temperature remained normal, as did the transmission and the tyres survived without a hint of the forces passed through them.