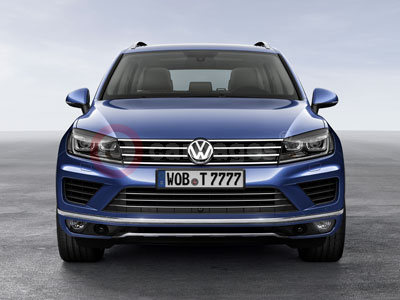 The Volkswagen Touareg has had a makeover for 2014 with a refreshed new look.

It will be available to be ordered in August in the UK with the first deliveries expected in November 2014.

The front of the Touareg features larger bi-xenon headlights; there is a deeper new front grille with four instead of two horizontal fins and a re-designed bumper to give it the appearance of a wider stance.

The rear gets a new rear diffuser between the twin tailpipes and LED rear fog lights integrated in the bumper. The exterior is completed with new door mirror caps, a range of new wheel designs and new paint colours.

The interior sees a new range of colours for the leather with new design accents and lighting.

There have been some revisions to the technology and there are new safety features. All models will feature an automatic post-collision braking system, bi-xenon headlights and a coasting function on the eight-speed automatic gearbox. This last feature utilises the vehicle's kinetic energy when driving downhill or when acceleration is not needed. As on existing Volkswagen models with coasting, it can be deactivated temporarily by simply tapping and releasing the brake pedal, or switched off through the vehicle's systems.

The ADC automatic distance control (an option) has been revised. The ADC system, utilises -a radar sensor to detect the distance from the car in front, maintaining a preselected speed and automatically braking or accelerating in traffic. It now includes a city emergency braking function, which can automatically pull away in stop-and-go traffic.

The V8 diesel and Hybrid models will no longer be offered in the UK.