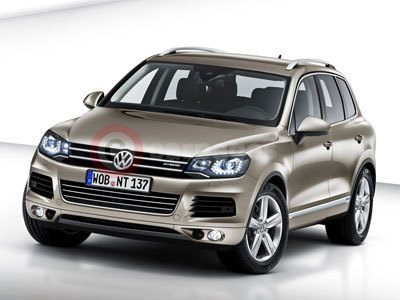 The all-new Volkswagen Touareg has been unveiled - a car which is up to 200 kg lighter and up to 20 per cent more fuel efficient than the model it replaces. It's sharper, cleaner and yet, in Hybrid form, able to out-accelerate many hot hatches while returning 34 mpg on the combined cycle. The new vehicle maintains all the same virtues of space, comfort, refinement and off-road and towing ability that have led the original Touareg to build up a loyal following since its launch in 2003.

The overall length and wheelbase of the Volkswagen Touareg have each grown by 40 mm to measure 4,758 mm and 2,900 mm respectively. The width of the new Volkswagen Touareg remains as before at 1,928 mm while overall height drops by 20 mm to 1,724 mm.

The changes over the outgoing model extend far beyond new styling. Standard examples of the new Volkswagen Touareg will feature an eight-speed transmission as well as, on the majority of models, Start/Stop technology, touchscreen satellite navigation and leather upholstery. In addition, a choice of advanced new options can be specified including High Beam Assist that automatically dips the headlights when it senses oncoming traffic, Side Assist to warn of vehicles occupying blind spots, adaptive roll compensation air suspension and air conditioned, massaging seats.

At the heart of the new Volkswagen Touareg is a range of highly efficient petrol and diesel engines and, for the first time, a Hybrid.

The entry-level engine and the likely volume seller is a powerful and refined 3.0-litre V6 TDI engine generating 240 PS and 405 lbs ft of torque while returning 38.1 mpg and emitting 195 g/km of CO2 to place it in VED band J.

A new 4.2-litre TDI V8 engine producing 340 PS and 590 lbs ft of torque sits at the top of the new Volkswagen Touareg range. Despite its substantial power and torque outputs the new engine is still capable of achieving 31 mpg on the combined cycle while emitting 239 g/km of CO2.

The new Volkswagen Touareg range will extend to four versions in the UK: SE, Altitude, Hybrid and Escape. The Escape model, available with the V6 TDI engine, features a system called 4XMOTION which comprises reduction gearing, centre and rear differentials that can each be fully locked for off-road applications and five stage control for the four wheel drive system. The first stage is for on-road applications, the second is for off-road use and activates automatic control for the mechanical differential locks, stage three engages the low-range gearbox with revised mapping of the gearbox to raise the shift points and switches off the automatic upshift in manual mode. Stage four applies the centre differential lock, stage five adds the rear differential lock.

The greater refinement afforded by the new drivetrain is matched by an all-new interior featuring a subtle mix of leather, wood and aluminium highlights and more space than ever before thanks to the longer wheelbase on which the new Volkswagen Touareg sits. Though the Volkswagen Touareg remains a five-seater, legroom in the rear has grown significantly due to the new sliding rear bench and reclining backrests while the boot measures from 580 litres to 1,642 litres depending on the seating arrangement.

Production of the new Volkswagen Touareg for the UK market starts in June 2010 before first deliveries commence in August. Prices and specifications will be announced nearer this time.