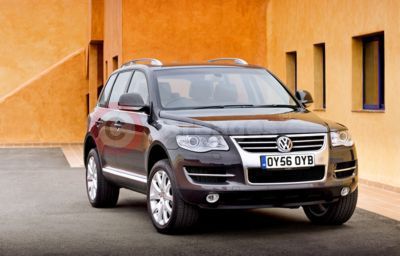 The new Touareg is now available to order ahead of its arrival in showrooms on 1 March 2007.  With a host of new technologies and fresh styling Touareg prices will start from £29,465 on the road RRP for the 2.5-litre TDI 174 PS with DPF (Diesel Particulate Filter) before rising to £57,535 for the range-topping Altitude 5.0-litre V10 TDI DPF.

Over 2,300 individual parts were replaced in the comprehensive range of changes made to the new Touareg.  Among the most noticeable of these is the adoption of the new Volkswagen 'face' first seen on the Eos coupé cabriolet.  The Touareg benefits from a new grille section, reprofiled headlights framing a new bumper and a pair of aerodynamic wing mirrors.  At the rear the light clusters are replaced by distinctive new units featuring two pronounced circular lenses.  More subtle is the mildly revised rear bumper along with new tail pipes.  The changes continue inside where the interior features new leather finishes and redesigned front seats which are joined by a refreshed instrument panel incorporating a new multifunction display.  An option new to the Touareg is the powerful 620 watt Dynaudio stereo system.

The new Touareg builds on the previous model's reputation for technological and engineering prowess and marks the debut of exciting new technologies under the skin.  Chief among these is the new ABSPlus system which, through working with the Touareg's ABS, can cut braking distances by up to 20 per cent on loose or muddy surfaces.  When applied to the V10 TDI model the system is linked to a set of powerful new Brembo brakes to haul the Touareg to a stop with even greater conviction.  Building further on the Touareg's substantial list of safety equipment is the option of Front Scan.  This system uses a series of sensors linked to Adaptive Cruise Control (ACC) to scan the road ahead for any dangers and can - if necessary - slow the vehicle to a complete halt.  This is a first in the Touareg's segment.

Side Scan, another new technology, senses the area next to the vehicle and acts as a lane changing aid by lighting a small warning lamp in the wing mirrors to warn of the danger of collision.

The Touareg's ability off-road is boosted by the addition of new rollover sensors.  The system scrutinises vehicle acceleration, yaw angle and yaw speeds.  Should the system detect that a rollover is imminent the head / thorax airbags are automatically deployed to reduce the risk of injury.

Three versions of the new vehicle will be offered comprising Touareg, SE and Altitude.  As with the previous model the Touareg is fitted with a comprehensive range of standard equipment including 4XMOTION permanent four-wheel drive, air conditioning, a CD player coupled to ten speakers, hill start and descent assist, six airbags and ESP (Electronic Stabilisation Programme).

The engine line-up remains unchanged with the option of a single petrol 3.6-litre V6 280 PS or the choice of three diesel engines in 2.5-litre TDI DPF 174 PS, 3.0-litre TDI 225 PS or 5.0-litre V10 TDI DPF 310 PS guises.  The 3.6-litre V6, 3.0-litre TDI and 5.0-litre V10 TDI engines are all fitted with six-speed automatic gearboxes as standard while the 2.5-litre TDI retains a six-speed manual gearbox as standard with the option of an automatic gearbox.

Since its launch in May 2003 the Touareg has proved a hit with UK buyers seeking a mix of off-road versatility combined with sharp on-road dynamics and comfort.  Over 10,500 vehicles have been sold in the UK alone, nearly half of which are specified in top-of-the range Altitude trim.