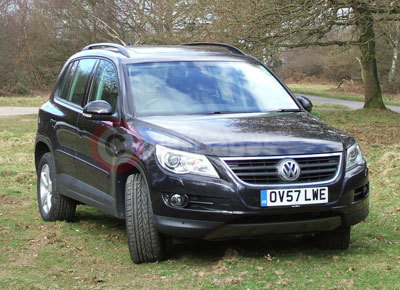 There seems to be a growing trend with Volkswagen: all the names of its new cars begin with the letter ‘T’. That said, the soon to be launched Scirocco, will break the run.

But back to ‘T’. First there was the very capable and stylish Touareg; then came the Touran, MPV and now we have the Touareg’s smaller sibling, the Tiguan, which went on sale in February 2008.

How the name came about is well documented but for those who don’t know it is an amalgamation of tiger and iguana; the German for iguana being leguan. There you have it. The name was one of five (Nanuk, Namib, Rockton and Samun), put to the readers of the AutoBild group and over 350,000 votes were returned, with Tiguan being the clear winner.

The Tiguan’s relative position within the VW range is much the same as that of the Freelander and the Range Rover. Furthermore, the Freelander is one of the Tiguan’s, more established rivals, along with the Honda CRV and the Toyota RAV4. Although this compact SUV share’s much of its design philosophy of the larger Touareg, it doesn’t have the same panache.

Usually, photographs of new vehicles do not do them justice and they look much better in the metal, so to speak. The Tiguan was the other way around. The blunt nose, squared wheelarches, deep skirts and contour lines appeared new and exciting, albeit with a hint of Audi Q7. However, first sight of the ‘real thing’ left me a little disappointed. Understandably, there is only so much the designers and engineers can do with the canvass they have and, as a result, the Tiguan bears all the traditional VW hallmarks; smart conservatism and little else.

The front end has the most exciting aspect with a flat, wide, clamshell bonnet above a chrome-spangled upper grille bearing a large VW emblem. The eye-like headlamps are very similar to those on the Touran and their shape is echoed in the taillights, which extend across the deep tailgate.

The aim was to produce a vehicle that looked powerful and muscular, which to some extent it does but, as with most VW products, the key is in the detail.

All Tiguans come with the 4MOTION, four-wheel-drive system as standard, although some models are more capable than others. Because of the likely damage to the bodywork, when travelling off-road, the Tiguan has small, plastic surrounds to the wheelarches, which can easily be removed and replaced, should the need arise, thus saving on the cost of repairs.

Volkswagen Tiguan Images may not be UK specification cars. Colours and exterior and/or interior elements may differ from actual models.