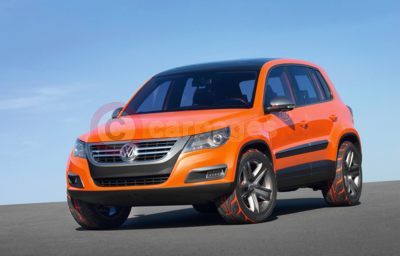 Volkswagen has unveiled its compact 4x4, the Concept Tiguan, at the Los Angeles Auto Show, and has announced that the first examples of the SUV will be delivered to customers by the end of next year.

The first news of the Tiguan's development came with the debut of Concept A in Berlin earlier this year.  This was followed by the naming of the model in July, the result of a poll of more than 350,000 readers of magazines of the AutoBild group.  This latest development in Los Angeles takes the Tiguan one step closer to production and hints strongly at how the final version could look.

Maintaining the 'baby Touareg' appearance of the Concept A, Concept Tiguan makes a bold styling statement.  At 4.4 metres long, 1.85 m wide and 1.69 m high, it is very similar in size to the Touran compact MPV (4.4 m, 1.8 m, 1.6 m).  Klaus Bischoff, who was responsible for the exterior design of the car said: 'It was very important for us to have the car appear powerful and muscular.  For us that was a higher priority than anything else.  An off-roader needs a long hood and an upright position.  That lends the vehicle self-assuredness and power.'

The Concept Tiguan's 'face' and side profile are immediately recognisable as those of a Volkswagen, and yet they are different from all existing models in the range.  The dark-anodised metallic tone of the front grille contrasts with the body colour, while a grid pattern and two dominant cross fins to the left and right of the Volkswagen roundel complete the look.

Another feature is the Concept Tiguan's tyre design.  These 19-inch prototypes, developed by Continental, have an orange radial stripe beneath the tyre profile which matches the car's paint colour.  This colour is not simply painted on: it penetrates the rubber layer as a 'baked in' component of the tyre's casing.  The eye-catching anthracite-coloured alloy rims are likely to feature in the production vehicle.

At the rear, the lights are integrated into the shoulder section similar to those on the Eos and Passat, while the steeply sloping tailgate extends right down to the bumpers, giving the Tiguan an unmistakably SUV design.

Inside the Concept Tiguan, the black, silver and orange colour theme continues.  The vintage style black leather seats are trimmed with an orange pattern which mirrors that of the tyre tread.  A panoramic sunroof adds light to the spacious interior which can seat up to five occupants, while to add versatility, the rear bench seat can slide fore and aft and be folded down to increase loadspace.

Under the bonnet, the concept car features a completely new type of diesel engine, called BLUETEC.  Developed in partnership with Audi and Mercedes-Benz and presented for the first time at the LA show, BLUETEC employs a modular concept of different systems to reduce emissions significantly.  One of these systems is the NOx storage catalytic converter which cuts nitrogen oxides by up to 90 per cent over current diesel units.  This 'Clean TDI' will comply with the strictest emissions standards in the world and is one of the first components of the BLUETEC offensive.

More details on the Tiguan will be revealed in the first quarter of 2007.  The car will go on sale in the UK early in 2008.