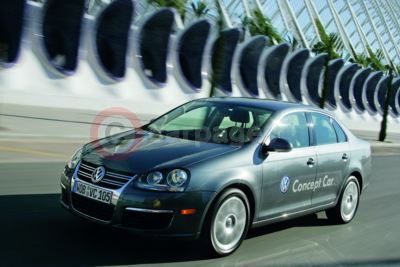 Volkswagen has unveiled the cleanest ever TDI engine.  First test drives demonstrate the high potential of Volkswagen technologies, which consequently reduce nitrogen oxide.  In the Jetta a new 2.0-litre common rail diesel engine with a nitrogen oxide reservoir catalytic converter was used, which complies to the Californian emission standard 'Tier 2 / Bin 5'.  These requirements are considered the most stringent worldwide.  The first production run of the 'Clean TDI' with nitrogen oxide post-treatment system will be made during 2008 in the USA.

The central theme of the entire concept is the reduction of nitrogen oxide.  Engineers in Wolfsburg reached this goal through internal development of the engine and the use of new emission post-treatment technology.  The result: up to 90% less nitrogen oxide emissions (NOx).

This drastic reduction was necessary in order to comply with the Tier 2 / Bin 5 norm, which applies to California and four other states in the north-east of America (Massachusetts, New York, Vermont and Maine).  This norm limits NOx emissions to 70 mg per mile.  In order to comply with this standard, completely new emission treatment technology was necessary.  As a result, Volkswagen has developed two new systems connected to the oxidation catalytic converter and the particle filter in the exhaust system.

New NOx reservoir catalytic converter technology is currently being tested for car models below the Passat class.  Nitrogen oxide is absorbed like a sponge, leading to a high level of efficiency.  As with the particle filter, the system is regularly cleaned without the driver noticing.  To do this, the engine management system changes operation modes for a few seconds.

Larger and heavier models feature the Selective Catalytic Reduction (SCR) catalytic converter.  The central element is an aqueous solution such as AdBlue, which is transported in an additional tank made from stainless steel or plastic.  Urea comprises 32.5 per cent of this solution, which is continuously injected into the exhaust system in front of the SCR catalytic converter using a metering valve.  The dosage is made according to the gas emission stream.

The urea solution is finely atomised by a grille and is converted in hot exhaust gas into ammonia before it reaches the catalytic converter.  The ammonia then reacts with the nitrogen oxide in the catalytic converter and separates it into nitrogen and water.  Unlike pure ammonia, AdBlue solution is non-toxic, odourless and biodegradable. Volkswagen intends to install the additional tank so that the car can be driven without maintenance between services.  According to American regulations, the complete system must be fully functional for at least 150,000 miles.

BlueTec is a joint project between Volkswagen, Audi and DaimlerChrysler, and is intended to establish the diesel engine further in the American car market.  The manufacturers are convinced that the diesel engine is the clean, low-consumption alternative for future car use, which is backed up by current economic and political conditions.  Each of the manufacturers involved in the BlueTec joint project is working on individual technical solutions for stringent exhaust gas emission standards and plans to market these independently.

Volkswagen is the diesel pioneer in the USA - more than 800,000 diesel cars from Volkswagen have already been sold there.