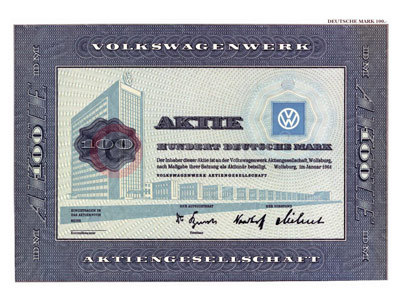 On 7th April 1961, the Volkswagen Share was, for the first time, traded on a regulated open market. The "Volksaktie (People's Share)" has seen a long term enhancement in value in those 50 years. "The Volkswagen Share has become a successful share," Hans Dieter Potsch, Member of the Management Board for Finance & Controlling, pointed out. "Once a symbol of the Beetle era and the German economic miracle in 1961, it reflects today the high performance and solidity of Europe's largest automaker."

The initial public offering (IPO) of 1961 was preceded by the passage of the Volkswagen Act and the subsequent partial privatisation of the company. Under the banner of "Wealth for everybody", the German Federal Government fostered the participation of citizens and employees in companies through the issuance of shares. The Volkswagen Share became the prototype for such a "People's Share."

With a legislative basis in the Volkswagen Act, the company's name of Volkswagenwerk GmbH was changed to "Volkswagenwerk Aktiengesellschaft" on 22nd August 1960 and registered in the Wolfsburg Commercial Registry. The process of privatisation came to its conclusion with the Volkswagen Share's initial listing on the regulated open market on 7th April 1961: In a brief period after the onset of trading, the price shot up from its issuing price, which was fixed at DM 350, to DM 750. Those shareholders who purchased a share for the equivalent value of DM 350 then and have held on to it, are nowadays, after two successful share splits, in the possession of twenty ordinary shares with a counter-value of about €2,200 and furthermore received a dividend payment for the equivalent value of around €570.

The Wolfsburg automaker has raised its capital base by the issuance of shares several times over the course of the last 50 years. Volkswagen AG issued preferred shares in 1986 for the first time, which are traded on the stock market since then just like the ordinary share. The seventh capital increase, conducted on 16 April 2010, was the largest in the automotive industry up to that date and achieved a net yield of around € 4.1 billion. In doing so, Volkswagen secured its financial flexibility for the planned creation of an integrated automotive group together with Porsche.

The sphere of shareholders was also subject to changes. The Federal Republic of Germany, for instance, parted with its holding in the company in 1988 and sold its 20 per cent block of shares.

Volkswagen Group has at its disposal a stable shareholder structure today. Alongside the 20 per cent holding of the State of Lower Saxony, Porsche Automobil Holding SE holds 50.74 per cent of the voting shares. Qatar Holding LLC has been involved as the third major shareholder in the Volkswagen Aktiengesellschaft, with its acquisition of 17 per cent of the ordinary shares since December 2009. As a result, the Volkswagen preferred share replaced the ordinary share in the DAX, the German stock index, in the same month.