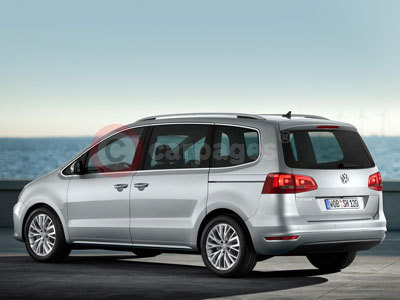 The all-new Volkswagen Sharan has made its debut at the Geneva Motor Show. Based on an advanced new platform and featuring twin sliding doors, a seven seat configuration and a range of frugal yet powerful petrol and diesel engines, the Volkswagen Sharan is set to establish new standards of efficiency, practicality and refinement in its class.

Access to the rear seats in the new Volkswagen Sharan is granted via a pair of large sliding doors that can, along with the tailgate, be specified with electric motors to operate automatically. The centre row features three individual seats that can be moved by up to 160 mm back and forth if required and, when not in use, can be folded to create a flat loadspace.

The third row of seats is made easy to access through the ability of the centre row of seats to slide and pivot forwards by 20 degrees. As a result of a wheelbase extended by 75 mm over the outgoing model, the new Volkswagen Sharan's third row of seats is large enough to accommodate adults as well as children. As with the second row of seats, they can also be folded flat into the floor when not required.

At the heart of the new Volkswagen Sharan is a range of four advanced TSI petrol and TDI diesel engines linked to six-speed manual or DSG gearboxes. A 1.4-litre TSI petrol engine developing 150 PS while returning 38.1 mpg and emitting 172 g/km of CO2 is joined by a 2.0-litre unit which is mated to a standard DSG gearbox and produces 200 PS. This engine emits 201 g/km of CO2 while returning 32.8 mpg.

The diesel range comprises two 2.0-litre common rail engines producing 140 and 170 PS. In 2.0-litre TDI 140 PS form the Volkswagen Sharan returns 52.3 mpg while emitting 143 g/km of CO2 to make it one of the most efficient vehicles in its class. The 170 PS model emits 152 g/km of CO2 and has a combined economy figure of 49.5 mpg. To further improve efficiency, all models except the 200 PS variant feature Stop-Start and regenerative braking systems as standard.

Following its international debut in Geneva the new Volkswagen Sharan will go on sale in the UK later this year with prices and specifications due to be announced nearer this time.

Volkswagen Sharan Images may not be UK specification cars. Colours and exterior and/or interior elements may differ from actual models.