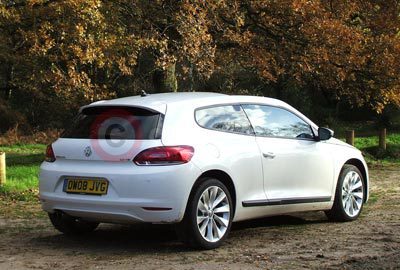 There is a 6-speed automatic transmission available, which is also of the clever DSG variety (twin clutch) but you will have to wait a bit longer for more engine choices as the 1.4TSI (160PS) unit comes in early next year (2009) mated to the 6-speed manual or 7-speed automatic ’boxes. Along with this will be a 2.0-litre TDI (140PS) diesel for extra economy.

As it stands, the test car returns 26.6mpg for the urban cycle, 47.9mpg for the extra-urban and the combined works out as 37.2mpg with emission of 179g/km. However, it is unlikely that Scirocco drivers will get anywhere near those figures as it is all too tempting to play with the torque and power.

Although the ACC system comes from the Passat, the main underpinning for the Scirocco is derived from the Golf GTi chassis. Not only is the Volkswagen Scirocco lower but it comes with lowered suspension too. The low centre of gravity and wide stance enhances the handling but there can be a touch of axle-tramp, during energetic driving on very uneven surfaces. But that is part of the fun however, only the brave will switch off the AR traction control. ESP is standard, along with Hydraulic Brake Assist and ABS and there is also an Electronic Differential Lock.

Inside, the Scirocco is just as focused and blatantly sporty, with room for four adults in full-sized sports, almost bucket-type, seats, which are very well contoured and supportive. Those in the front have manual height adjustment, an anti-whiplash design and a tilt and slide function to allow people into the rear seats - just mind your head on the cant-rail.

Once there, adults will have adequate legroom and a bit more headroom than of old. Children benefit from ISOFIX fittings but they might not appreciate the high-level, darkened windows.

It is not just the privacy glass that makes it so murky within the cabin but the black roof lining and interior too. What is more, the test car came with dark Anthracite ‘Vienna’ leather seat covers, which adds £1,535 to the £20,940 asking price. There is a panoramic roof but it doesn’t help too much as it too is made from darkened glass and only the front half opens. This is an optional extra at £630 and as it seems to be a continuation of the windscreen, I have a feeling it will look better with the darker colours than it does in Candy White.

As well as a shed-load of fun, the single, GT trim buys quite a lot of goodies, such as, 2Zone climate control, automatic wipers and headlights, integrated front fog-lamps, powered and heated door mirrors, an auto-dimming rear view mirror, multi-functional computer and 18-inch alloys.

Set into the standard centre console is a 6-CD autochanger with radio and MP3 compatibility, controlled through a touch-screen. The system comes with eight speakers and an AUX socket. If you want to pay the extra £1,180 for Satellite Navigation the one fitted to the test car will do nicely. It has a 30GB hard drive, an SD card reader, MP3 WMA and DVD compatibility and if that is not enough, it remembers where you’ve been and records routes even if the roads don’t exist on the map.

There is much more to the new Volkswagen Scirocco than I have space for. But, I hope that my enthusiasm for this delightful sports coupe has been made evident. Enough to entice you to go and have a test drive - you won’t be disappointed. The Scirocco is back and I think the SEAT Leon Cupra R has just been knocked off my No.1 spot.