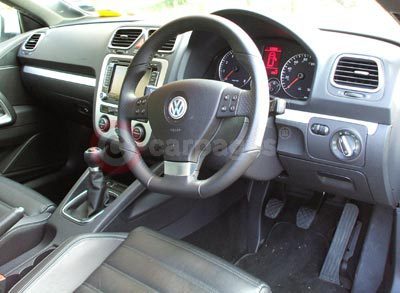 The rear track is marginally wider than that at the front but the muscular shoulders and slender waist that curves seductively in above the lights, exaggerates the width. The rear bumper is deep and chunky with a diffuser element to the lower edge, flanked on one side by twin, chromed tailpipes.

With the bumper being so deep and the midriff, pinched, the small tailgate is little more than a hatch, which lifts to reveal an awkward aperture. Carrying large, bulky items is out of the question unless you can jiggle them in with the help of a large shoehorn. But for smaller things, the deep 292-litre capacity is accessed over a very high lip. The two rear seats do fold but only the backs, so, while the capacity increases to 755-litres (550-litres less than the golf GTi), there is a step in the load floor.

But then, who cares? The new Volkswagen Scirocco was launched in September with a 2.0-litre TSI, petrol engine only. It is similar to that in the Golf GTi but has been pushed and prodded to good effect. Turbo-charged and intercooled, the 4-cyclinder unit produces 200PS between 5,100- and 6,000rpm and the starting point for the peak power is just about where the long, peak torque band ends. So, at any point between 1,700- and 5,000rpm, there is some 280Nm available just under your right foot.

I say foot but it only takes a scrunch of the toes to bring on the madness, especially in 3rd or 4th of the 6-speed manual gearbox. The best effect is felt with the car in Sport mode, which is one of three different settings that are part of Volkswagen’s Adaptive Chassis Control (ACC).

Normal is self-explanatory and Comfort is best for motorway travel. But pressing the switch on the central tunnel to Sport effects a sharp intake of breath from the driver and car as the suspension, steering and accelerator responses get into character. Sport offers taut, crisp handling and the accelerator becomes more like an on/off switch but it should be used with caution as the speed limit comes up very quickly indeed and the Scirocco is capable of a top speed of 146mph following a 0-62mph time of 7.2 seconds.

In the 5th and 6th gears the oomph accompanied by a great noise from the twin exhausts, is lessened slightly but swift, safe motorway overtakes are still a breeze.