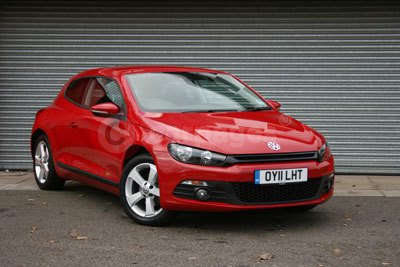 The Scirocco is Volkswagen’s eye-candy model, a sleek and pretty three-door, four-seater coupe in a svelte body with solid VW technology underneath. Coupes are enjoying a strong resurgence, and the Scirocco is a practical choice both from a size aspect and one of price.

So-called after a hot desert wind from the Sahara that blows across the Mediterranean coastline, the Scirocco is the latest in a line of models dating back to the 1970s. The current car is the third generation in the series. Originally Sciroccos were assembled by the renowned coachbuilder Karmann in Osnabruck, Germany, but since 2008 the car’s production has been in a Volkswagen Group factory in Portugal.

Under its swept-back body the Scirocco is based on the VW Golf, although not the latest generation launched in late 2012 and on sale in the UK from early 2013, but the well-regarded previous model.

Not that you would know from the outside, because there are few visual clues that it is effectively a Golf in drag, with Volkswagen’s mainstay model lurking underneath the Scirocco’s unique body style.

So it’s a decent performer rather than an exceptionally quick one, but its appeal lies in the combination of reasonable pace with good fuel economy. It has a combined figure of 62.8 mpg on the government fuel cycle, and the CO2 output is 118 g/km, putting it in band C for the annual VED tax disc.  From a Benefit-in-kind company car liability viewpoint, it rates a very reasonable 13 per cent.